As a plant geek, Michael Rayburn of Rayburn Farm in Barnardsville loves heritage varieties of just about everything. The older, the more obscure, the closer to wild, the better. The problem with many heritage varieties, though, is that they have a shorter shelf life than modern varieties. The upside is that they tend to taste better—sweeter, and more intensely flavored.

Rayburn’s Early Glow strawberries are plump and deep red, but they have a shelf life of just a few days. They need to be used quickly before they rot. Many U-pick farms grow this variety because of its intense flavor, making it popular among people who come to pick a quart or two and use them quickly. But Rayburn only grows a limited amount and needed to find someone to buy the strawberries in bulk.

About 20 miles south in Asheville, Greg Garrison, owner of The Hop Ice Cream Café, was looking for a steady supply of local strawberries for his ice cream creations and came into contact with Rayburn Farm.

“These are perfect for our needs,” says Greg Garrison, owner of The Hop. “We chop and freeze them, and they’re ready when we need them.”

Before he met Rayburn, Garrison bought strawberries at the WNC Farmers Market, which was the only place he could find fresh berries in bulk. “We had had no control over what was available,” Garrison says. “This partnership allows us to get the best berries for our needs, and to know where those berries came from and how they were grown.”

Rayburn and his wife, Lauren, moved from the Washington, DC area in 2013, where he worked at the United States National Arboretum. They now farm about an acre in front of their house and two small plots nearby.

From that acre, Rayburn grows enough strawberries to keep The Hop producing ice cream year-round, along with some 1,800 pounds of basil, 18 varieties of potato, 10 varieties of garlic, three varieties of pumpkin, beets, tomatoes, beans, and a variety of herbs.

“There are ways of planting in staggered rows that allow you to get twice the crop,” he says.  “And when I have a question about something, there’s this.” He pulls his smartphone from his back pocket. “I can research from out in the field if I need to.”

WINTER ON THE FARM

Although Rayburn isn’t tending plants during the winter, he is planning for the next year, building new beds and looking for new varieties of seeds.

This last winter, Rayburn built a greenhouse, which will allow him to grow some hardier varieties of herbs and leafy vegetables, and to get an earlier start on some seeds. Winter also is a good time to seek out new restaurants and breweries to buy his crops. He now sells to dozens of restaurants and 21 breweries.

SPRING ON THE FARM

Seedlings are started early in the spring, several weeks before the anticipated final frost of the season. The ground must be tilled and prepared. The rows of strawberries are cleaned up so they aren’t overtaken by grass and other weeds. Nearby, tiny seedlings are planted in neat rows. And tender perennials, such as rosemary and lavender, are brought out from the greenhouse to soak up the spring sun.

SUMMER IN THE CREAMERY

By early summer, all the berries are in the freezer, chopped and ready to go into the base that’s prepared in Atlanta to Garrison’s specifications. The milk comes from a farm in Spartanburg, and the eggs are regional as well. But food handling laws prevent The Hop from preparing its ice cream base on site. With the berries secured, Garrison is free to experiment, and he uses some of Rayburn’s crops—beets, garlic, and herbs among them—to try new flavors.

AUTUMN ON THE FARM

Harvest continues until November, as some varieties of vegetables and some herbs can endure a frost. As the last of the crops are brought in, Rayburn can begin to plan what will go into the ground next year. Then the cycle begins again. ◊◊ 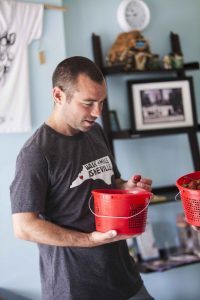 Greg Garrison, owner of The Hop Ice Cream Cafe, uses locally grown berries in his strawberry ice cream. The berries travel less than 20 miles from Rayburn Farm in Barnardsville where Lauren and Michael Rayburn (pictured in banner) grow produce for the creamery. 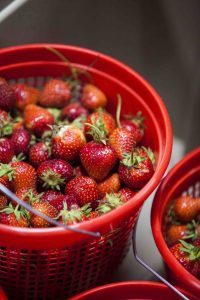 Ripe For The Picking