A perfect means of using up fresh, local corn and peppers before they’re gone for the year.

Reprinted with permission from A Year of Pies, Ashley English, 2012, Lark, an imprint of Sterling Publishing Co.

*See recipe for pie dough below.

To prepare the crust, roll out the dough on a lightly floured surface and fit it into the 9-inch pie pan. Trim the crust overhang to 1 inch and crimp the edges decoratively. Place the crust in the refrigerator while you prepare the filling.

To prepare the filling, grill the corn ears in a skillet over high heat with a few tablespoons of peanut oil. Turn partially every minute or so for 10 minutes, until the corn is mostly browned and blackened in some spots. Alternatively, you can lightly blacken the corn on a barbecue grill.

Remove the corn to a platter to cool slightly. Add a bit more peanut oil to the skillet and similarly brown and blacken the diced peppers. Remove the peppers to a medium-size bowl.

Alternately, if using a barbecue grill, cook the peppers whole first, then seed and dice.

When cool enough to handle, cut the corn kernels off the cobs. Add to the peppers in the bowl. In a separate bowl, combine the eggs, sour cream, half-and-half, salt, and chipotle or chili powder. Whisk until thoroughly incorporated.

Set the pie pan on a rimmed baking sheet and bake for 45 minutes, until the filling is golden brown on top and the eggs are cooked and not wobbly in the center.

Cool at least 30 minutes before serving.

*Variation: If you don’t care for the heat present in poblano and jalapeño peppers, simply substitute green bell peppers. 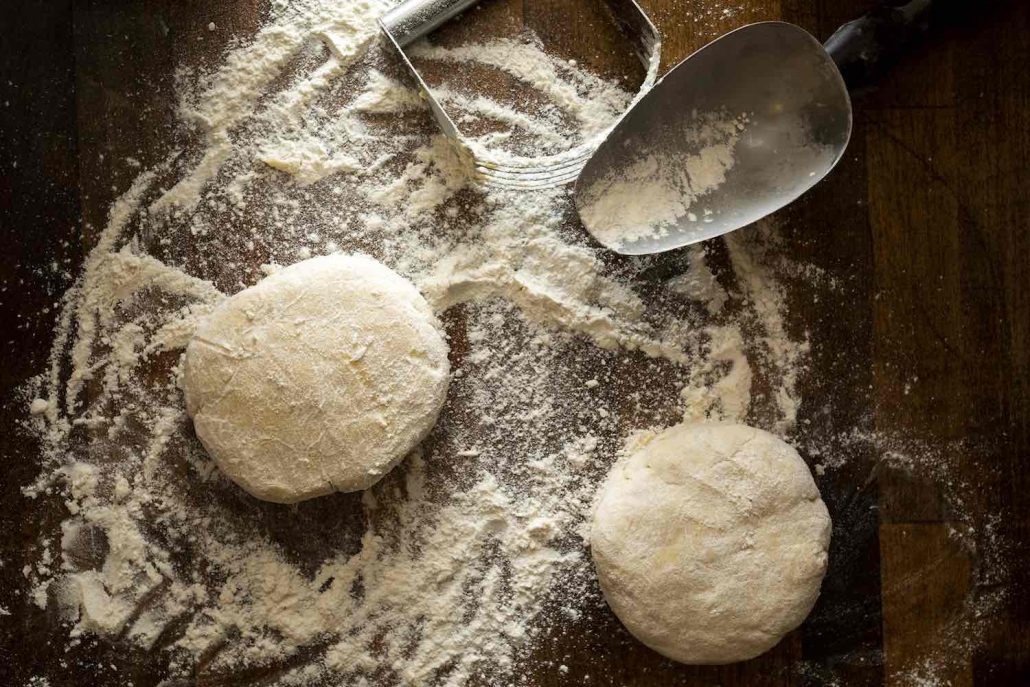 Reprinted with permission from A Year of Pies, Ashley English, 2012, Lark, an imprint of Sterling Publishing Co.

Yield: Dough for one double-crust pie.

Mix the flour and salt together in a medium-large bowl.

Using a pastry blender or two forks incorporate the butter until the mixture resembles coarse meal (you should still have some rather large bits of butter when you’re done).

Slowly drizzle in the ice water. Stir with a large spoon until the dough begins to clump.

Transfer the dough onto a floured work surface and, using your hands, fold it into itself until all of the flour is incorporated into the fats. The dough should come together easily but should not feel overly sticky.

Divide the dough in half, shape it into two balls, and pat each ball into a ½-inch thick disk. Wrap each in plastic wrap and refrigerate for at least an hour. ◊◊