The Rich Flavors of India

As a child, Ruby Banerjee loved to eat fish in mustard sauce. Her mother spent hours in the kitchen each day preparing this and other classic Indian meals for the family, and it awakened in Ruby a taste for rich, bold flavors. Born in Calcutta, she lived and ate her way around many regions of India before moving to the United States in her thirties.

Now, as one of Western North Carolina’s most celebrated instructors of Indian cooking, Banerjee demonstrates an impressive knowledge of a country known for its culinary variety. Her dishes reflect the religious beliefs, cultural traditions, and regional ingredients that shape the food of India.

Ruby’s father, a naval officer, transferred locations every three or four years, and her mother learned the traditional dishes of each new region. When Ruby was young, the family moved from Calcutta (now Kolkata) to Bombay (now Mumbai). The food was quite different, being mostly vegetarian. With specialties like crispy potato pancakes called aloo tikki, samosas filled with curried vegetables, and cilantro-mint or coconut chutney, Ruby’s mother had a lot of delicacies to choose from as she fed her family.

Each move introduced the family to new dishes. Ruby’s own parents were Hindu and did not eat beef. In some areas, pork is not eaten because of religious beliefs, and strict vegetarians in the Jain religion don’t eat root vegetables, such as onion and garlic, as part of their non-violent beliefs. Southern India has access to lots of fish, fresh coconut, and rice, and so those elements play a starring role in the foodways of the south, while northern India grows a lot of wheat and consumes a huge variety of breads.

With all this variation, Banerjee grew up appreciating the many flavors of her homeland. However, she did not learn to cook until adulthood.

“My mother was a great cook, but she did not let us help much in the kitchen,” Banerjee says. Banerjee and her sister were given the chore of chopping vegetables but in terms of actual cooking, they were limited to breakfast. “That was the only thing we were allowed to make,” Banerjee says. “We learned to make toast and fry an egg.”

When Ruby married her husband, he was studying in the United States, so she moved here to be with him. “It was very difficult for me to dive into cooking after I got married and came to this country, because I had never really done it,” Banerjee says.

Missing the flavors of home, she began writing letters to her mother and sister-in-law, who responded with recipes written down by hand. A friend gave her a Bengali cookbook and, through trial and error, Banerjee began to learn. “My dishes weren’t very tasty sometimes because my masalas weren’t cooked right—they had a raw-ish taste,” Banerjee says. “I learned to appreciate the fact that my mother spent a lot of time in the kitchen to dish out those delicious meals.” 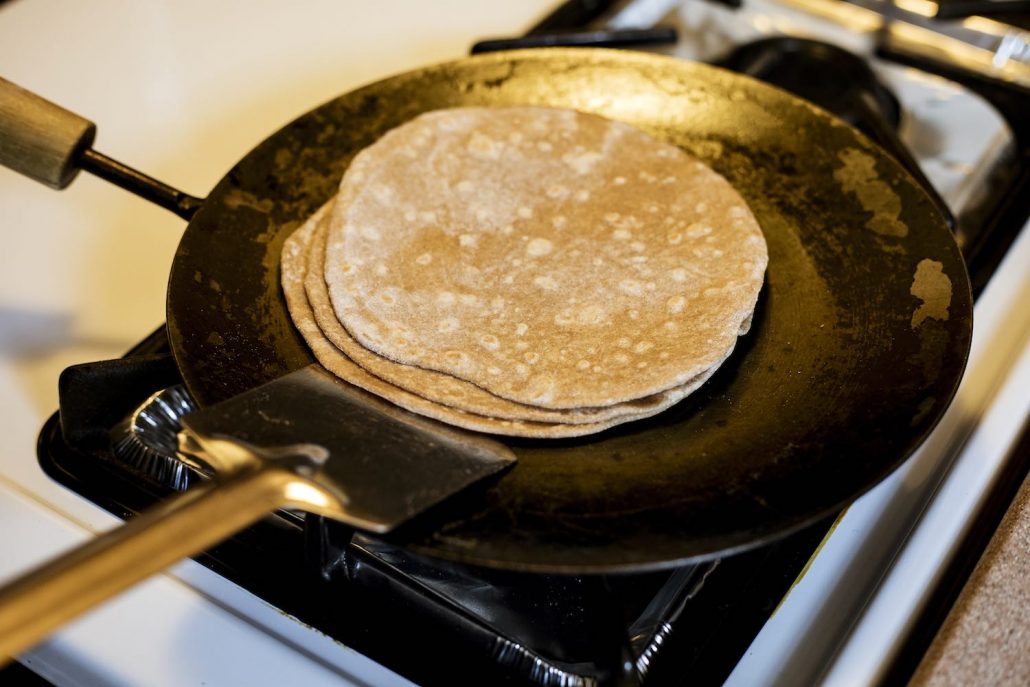 Banerjee began to teach herself the soups made from lentils, or “dahl” in Hindi. “There are so many different types of lentils, and each one is cooked differently,” Banerjee says. The variations seem to be just as endless with curries, although “curry powder” is generally not used in India because most people make their own spice blends or curry pastes based on personal taste, availability of ingredients, and tradition.

As Banerjee perfected her dishes, she discovered a growing awareness of the spices that make Indian cooking unique. Because she worked full time, she also developed shortcuts that allowed her to create the same flavors that had taken her mother hours to achieve. Her rice pilaf only takes about 20 to 25 minutes to make, and she remembers her mother spending almost an hour to make the same dish.

“When my mother tasted my version, she agreed with me that it was just as good as hers,” Banerjee says. As Banerjee’s repertoire increased and Indian food gained popularity, people began asking her to share these newfound skills.

In 2008, Nanette Davidson of the John C. Campbell Folk School in Brasstown asked her to teach a week-long Indian cooking class. Banerjee was a bit daunted but agreed. She taught a little bit of everything, from appetizers like crispy batter-fried vegetablepakoras to breads like naan, roti, or parathas, to meat and fish dishes like butter chicken and Kerala fish coconut curry. “I had a great group of people in my first class, and we learned a lot from each other,” Banerjee says.

This year marks her tenth year of teaching at the school, where her students learn about the food habits and distinct regions of India while experiencing the spices, sauces, and smells firsthand. “It just kind of refreshes what I know and reminds me of the variety of cuisines and cultures of India,” Banerjee says. “That’s why I enjoy my classes.”

Banerjee still loves fish in mustard sauce, but now she can make it herself to share with friends and students, giving them a taste of her homeland. ◊◊

Cathy Cleary, author of The Southern Harvest Cookbook and The West End Bakery and Café Cookbook, lives and works in Asheville, N.C. She co-founded the FEAST program, empowering youth and families through hands-on cooking and gardening education. She is a cook, writer, and event planner focused on food equity and sustainable agriculture. 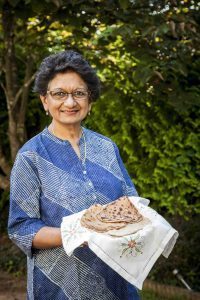 Ruby Banerjee, one of Western North Carolina’s most celebrated instructors of Indian cooking.