Mightier Than the Sword

The power of food writing in shaping cultures and thought

When I worked for a Memphis newspaper right out of college, the “Women’s Section” would present recipes with the occasional “informational” column from a very sweet older woman named Helen, who was a nutritionist. The food pages were tied to Wednesday grocery store coupons. I never saw issues of food security, childhood hunger, sustainable agriculture, or GMOs anywhere in the newspaper, much less on the food pages themselves.

I was honored to be a judge in the 2017 James Beard Media Awards and had the pleasure of attending the awards ceremony in New York in April. The awards ranged across books of all categories, including cookbooks as well as nonfiction and reference and scholarship categories. Media awards were also given in journalism, documentary, radio, webcasts, and podcasts, among other categories. It was an incredible experience being in the room with so many talented and gifted colleagues.

Our own North Carolina mountain girl Ronni Lundy took home TWO awards for her amazing book Victuals: An Appalachian Journey with Recipes, published by Clarkson Potter and edited by the phenomenal Francis Lam, host of the radio cooking program The Splendid Table and a former food columnist for The New York Times Magazine.

Ronni’s book is an excellent example of what food writing has become and the power it can wield. She writes beautifully about our region and its people with great respect and admiration for our traditional foodways, while acknowledging the new generation of chefs, home cooks, farmers, producers, and craftspeople making Appalachia their own.

She shoots holes through the ingrained stereotypes of impoverished hillbillies and features amazing people doing amazing things with and around food, helping to shine a light on the potential for new economic models in our region that don’t rely on an extractive industry, such as mining.

Looking at all of the well-deserving candidates for the Beard Awards reminded me of just how far food writing has come, how it has evolved into a culinary pen that is far mightier than the sword. While people have been writing about food for centuries, our modern-day voices are reaching a broad audience and being heard.

Vivian Howard’s book Deep Run Roots: Stories and Recipes from My Corner of the South includes a heartfelt narrative about Eastern North Carolina where she grew up. Asha Gomez’s My Two Souths: Blending the Flavors of India into a Southern Kitchen reflects the impact that the influx of different cultures into the South is changing the way we eat—and consequently the way we adjust our world views and the way we see one another. Hanna Raskin’s investigative reporting in Charleston for The Post and Courier (Hanna, a former Asheville resident and journalist, also won a Beard Award) has delved into such issues as how we feed the prison system and the environmental dangers threatening crab.

My friend Toni Tipton-Martin’s Beard-winning book The Jemima Code: Two Centuries of African American Cookbooks documents the lives of African-American women who have influenced American cooking since Malinda Russell, a black woman from East Tennessee, became the first African-American cookbook author in 1866. Dr. Marcie Cohen Ferris’ magnificent and scholarly book The Edible South: The Power of Food and the Making of an American Region dives deep into the food of the South and its intertwinement with our heritage and culture.

Meanwhile, John T. Edge’s new The Potlikker Papers: A Food History of the Modern South was just in The New York Times, in a piece by Kim Severson. The book, she says, “spans 60 years, starting with the cooks whose food fueled the Montgomery, Ala., bus boycott in 1955 and ending with a South of new immigrants, where the fried okra might be sprinkled with fish sauce or the barbecue ribs doused in gochujang.”

In other words, food writing plays a big role in influencing how our world works and, in most cases, encouraging and inviting people of all different persuasions to come together over a shared meal and discover they also have a great deal in common.

Don’t get me wrong: I love recipes. But most importantly, I love recipes that prompt a deeper understanding and respect for one another, honoring our earth and the food she provides. ◊◊ 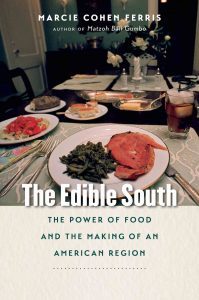 The Edible South, one of the books recommended by author Elizabeth Sims, dives deep into the food of the South and its intertwinement with our heritage and culture.