CHARCUTERIE IN THE BLUE RIDGE MOUNTAINS

Cured meats, like so many other preserved foods, are enjoying an incredible renaissance in modern culinary scene, but these foods are not new. As chefs and home cooks foray into the fermentation, curing, and smoking of meats and sausages, they enter into an ancient story between people and land, and a goldmine of cultural identity that may not be so obvious through the work of cutting meat and grinding salami. Learning the craft of charcuterie brings preservation to new levels, by preserving meat as well as heritage, and honoring tradition while also creating new and exciting flavors. Turning to the history of Appalachian meat processing provides clues into the science and art of charcuterie, and is rich with lessons on tuning in to the land, its gifts, and the rewards of handcrafted food.

Here in the mountains, small landholdings were seldom complete without a family hog, living off the fruit of forest trees, such as acorns and other nuts, and clearing hillsides through the growing season. Cherokee people kept hogs and other animals in addition to hunting wild game, and after forcing Cherokee off their lands, settlers developed Asheville in part due to the massive numbers of livestock, mainly hogs, being led through the Blue Ridge Mountains to markets in the South. The drovers, as they are known, were workers who moved herds of nearly 3,000 animals at a time through the mountains, and their need for animal feed and shelter was one of the main drivers of economic development in the region. Hogs for sustenance, and eventually as a commodity, is a concept as old as the hills, as the saying goes.

Hogs for home consumption were slaughtered in the fall, when cold weather prevented the rapid deterioration of the meat. While some parts of the animal were eaten fresh, a large part of the carcass was put through various processes of preservation—namely canning, smoking, and sausage making. Here we find some close-to-home examples of the charcuterie products for which we might be accustomed to paying top dollar at a local restaurant, originating from the necessity and ingenuity of regular people responding to the challenges and rewards of their home place.

Souse is one example of a mountain charcuterie product, and it has the most similarity to the terrines and headcheese found at butcher shops and salumerias today. The process is highly ingenious, as it uses some of the odder bits of the animal quite effectively. The head (and sometimes the feet), as well as other trim and fat, is boiled, which not only cooks the meat but produces a collagen-rich stock or ‘aspic’ that will solidify when cooled. The meat is pulled from the bones, shredded, spiced, and salted, and then canned up with the aspic to produce a fine suspension that can then be eaten sliced or dipped from the jar.

Ribs and spine were also canned, with plenty of back fat and collagen, a process very similar to the French rillettes. Fat is the key to the process in this case. As the meat slowly braises in the fat, it is infused with moisture and flavor, and the fat itself is what preserves the product after it’s finished cooking. Confit is a process in this category as well, the chief difference being that confit is generally whole joints with the bones still in them, braised in fat and stored in fat. The home larder then benefits not only from the salty, rich meat that has been preserved, but also the highly flavorful fat that can be used as a cooking medium and to lend flavor to other foods.

Bellies and hams were separated for curing whole using salt, sugar, and molasses, with plenty of sage and red pepper. After the meat was thoroughly covered with the curing mix, the cuts would often be moved to the family smokehouse, where they would hang for an indefinite amount of time. Because woodsmoke is inherently preservative, possessing a low pH and plenty of antimicrobial and antioxidant compounds, the environment inside of the smokehouse was perfect for the safekeeping of meat, even if there wasn’t a fire burning. The smokehouse thus served as a way of both cooking meat and also a charcuterie cabinet of sorts. There, salted meat could just hang out, be cut into for use in sauces and soups, or else left to completely cure or later smoke into the deeply rich hams and smoky bacon that we associate with the mountain South.

Any trim leftover was made into sausage, and stuffed into the intestines that had been saved over from hog slaughter. Sausage ingredients were primarily salt, sage, black pepper, red pepper, sugar, and maybe whiskey, though people likely used what they had on hand. Sausages could be eaten fresh or saved in the smokehouse to cure or cook. Drying in the smokehouse produces our region’s version of a saucisson or salami, and I’ve recently heard of accounts from slaves who placed ground meat mixes into corn husks for drying into salamis under porch eaves.

In this way, we can see how charcuterie is a fantastically varied craft, practiced and perfected by some of the people least valued by our society. It refers to the preservation of meat by diverse and intuitive means, and the combination of processes to produce a desired or safe result. While European prosciutto di parma or prosciutto san daniela offers a delicate flavor profile from being completely air cured in a coastal or semi-dry environment, the hams and bacon of Appalachia are deep and woodsy from woodsmoke and the traditional preferred flavors and flora of the mountains. And as chefs and home enthusiasts gain deeper understanding of charcuterie and its many variations, we use modern innovations to gain desired results more consistently and quickly.

It is possible to make charcuterie in the old way, which is entirely worthy and rewarding. For the home cook, it is arguably the best option, as traditional, slow-cured meats possess a flavor and a depth that commercial products can’t begin to touch. However, the vicissitudes of convenience culture have caused humans to devise quite a few tricks for speeding up and scaling up charcuterie production, through manipulation of temperature and available sugars in fermentation. In many modern recipes, for example, organic dextrose, a highly available and simple sugar for the fermentative bacteria, is added to the seasonings to lower the sausage’s pH, giving it the sourly salami flavor we love, while also creating an environment that excludes harmful pathogens. ◊◊

Meredith Leigh is the author of The Ethical Meat Handbook: A Complete Guide to Home Butchery, Charcuterie, and Cooking for the Conscious Omnivore (3rd place, MFK Fisher Award 2015) and Pure Charcuterie: The Craft & Poetry of Curing Meats at Home. Meredith works part-time for Living Web Farms, and she travels extensively teaching charcuterie and food production and processing. She also pursues other writing, namely poetry and nonfiction focused on the intersection of land and people, and land and the culinary sphere, with work featured in Crop Stories, various Ediblepublications, and Mother Earth News Magazine, among others. She lives with her partner and four children in Asheville, NC. 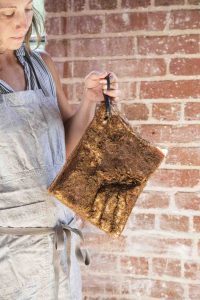 Meredith Leigh, pictured here, is the author of Pure Charcuterie

The World of Pork

COOKING WITH BEER
Scroll to top