Candy Roasters on the Rise

“Every seed has a story,” say Harold and Nancy Long, almost in unison as they sit at their kitchen table on a cold winter day. The woodstove whirs and ticks as gray clouds race past the horizon. The Longs are professional farmers in Murphy, about 100 miles west of Asheville. Harold is also an enrolled member of the Eastern Band of Cherokee Indians, and the couple has made it their mission to revive local and traditional Cherokee crops among the tribe’s farmers.

They speak with great warmth about Will West Long, a founder of the annual Indian Fair who had a corn variety named after him. They tell the story of the Cherokee tan pumpkin that went on the Trail of Tears and came back again. And they talk about the efforts that they and others have made to bring back the candy roaster squash, a uniquely Appalachian species that is showing up on menus and at markets across the region.

The story of the candy roaster is a story of connections, and one that becomes richer the more people you ask. It’s a movement—by the Cherokee Nation, the academic community working alongside it, and seed-savers on rural and city farms—to preserve an heirloom variety and the culture intertwined with it like the vines of the squash itself.

The history of the candy roaster, says Jim Veteto, director of the Southern Seed Legacy and executive director of the Appalachian Institute for Mountain Studies, is “shrouded in mist,” though it’s been long associated with the Cherokee. According to the Slow Food Ark of Taste, a database maintained by Slow Food USA, the squash has been cultivated by the tribe since the 1800s. Candy roasters may be “round, oblong, or pear shaped and can often look somewhat like a pumpkin.” And they can weigh anywhere from just a few pounds to 200 pounds. But all share the uncommonly sweet tangerine-colored flesh, sweet enough for pies without adding sugar.

Though this heirloom variety is much beloved by generations of farmers, it also takes some care. It’s open-pollinated, which means that it can’t be planted within a mile of other varieties that might create unintentional hybrids. It can be large and unwieldy to fit into a typical garden plot. And national trends away from family farming have not done it any favors. Veteto estimates that in southern Appalachia, only one percent of people are full-time farmers, and only a very few may be continuing the tradition of candy roasters.

Both the Eastern Band of Cherokee Indians and others who study and celebrate its traditions are now working to bring the squash back. Veteto, an avid seed saver and gardener, is an anthropologist in the Cherokee Studies Department at Western Carolina University and has worked as part of the Center for Cherokee Plants. “For every seed variety, I went with a voice recorder and asked [farmers] what they knew about the history,” Veteto says. He believes that Cherokee plants, the knowledge of how to cultivate them, and the stories surrounding them are crucial elements of Cherokee heritage.

Harold Long grew up in Cherokee, North Carolina, and has been farming since he was sixteen, like his parents and grandparents. Traditionally, his family has been basket-makers, and he is one of very few today who knows how to collect materials for Cherokee baskets; he is also a potter and carver. His wife, Nancy, originally from Wisconsin, is his partner in farming and in preserving the culture of Harold’s ancestors.

To bring seed back from the brink, both the Longs and Veteto grow out seeds they are given—often by older Cherokee farmers—in small quantities. The first year, they may produce enough to grow out a larger amount the next year. The following year, they may have enough to distribute or sell—not only from seed catalogs through the mail, but hand to hand across tables at seed swaps and giveaways.

The Longs’ 32-acre farm is perfect for growing heirloom varieties because it’s bordered on two sides by tribal land and is miles from the nearest neighbor garden, allowing them to grow open-pollinated plants. For the last twelve years, they’ve been part of the Cherokee Nation’s effort to revive and sustain its agricultural heritage, growing seed from traditional crops for the tribe’s seed distribution at the annual Indian Fair.

Eight hundred families received seed from them last year, and the season saw a bumper crop of candy roasters—Nancy displays a picture of Harold driving a front-end loader overfilled with them. When it came time to gather the seeds, they had enough squash to eat, to share, and to feed their chickens besides, pro- ducing some of the finest eggs around.

Veteto speaks warmly about the candy roaster, noting that it’s beloved by farmers across the state. According to Veteto, over 40 varieties of candy roaster have been documented in Western North Carolina alone, and he has seeds for at least 12. He considers them to be the best baking squash in the world.

“I’ve heard tell that some people in Yancey County make a candy roaster butter and then spread that on toast,” Veteto says. “And candy roaster pies are really great—just delicious!” They’re a good squash for the darkest days of winter, according to Veteto, because “they will keep until the spring,” especially those whose bumpy skin has earned them the name “rough barks.” And he remains hopeful that Cherokee seeds—through projects like the annual giveaway the Longs supply and the Cherokee Center for Plants—will get back into the hands of Cherokee growers, though they may not be full-time farmers as in generations past.

Last year, Slow Food Asheville chose the North Georgia candy roaster as its heritage food project. The season-long project celebrated what the organization’s board president Abby Landry calls “an excellent piece of produce.” Seeds were chosen and ordered early in the year, distributed for free at every weekly farmers market in the city, and advice and education was offered throughout the season on how to grow and cook candy roasters.

“I think some people see these squash and just think of them as decorative, but these are some of the best squash you can eat,” Landry says. “You can go savory or you can go sweet. It’s going to be really good in pies and soups.” Not only does she enjoy the taste and see the historical significance of heirlooms like the candy roaster, she sees them as an investment in the future of food and a vote for the importance of biodiversity.

“Candy roasters are so awesome to look at because of their shapes, their colors, their sizes,” she says. Landry, the Longs, and Veteto all grow different candy roasters. The Longs’ North Carolina candy roaster is grown from local Cherokee seed, and the squash, in variegated oranges, greens, creams, and even blues, are the ones the neighbors remember: squat, round, and bumpy.

Landry and her battalion of Asheville farmers grew the smaller North Georgia candy roaster, which is long, tan, and smooth. The candy roasters Veteto grows are also oblong and tan, though they can grow to be larger and thicker. The ones he sees in Yancey County come in two varieties: rough-barked or slick roaster, each with their enthusiastic supporters. What Veteto, Landry, and the Longs all share is an affinity for this squash, an amusement with its growing habits—up fences, into creeks, up trees—and the adamant assertion that it’s worth preserving.

And worth celebrating. Slow Food Asheville invited everyone who grew a candy roaster to donate one to Twin Leaf Brewing and then threw a Candy Roaster Ren- dezvous in October. In Landry’s words, the organization and the brewery decided, “Let’s just go Asheville-style and make a beer out of it!” So in addition to Slow Food Asheville’s usual end-of-season potluck, everyone who donated a squash got a free pint of Twin Leaf ’s Candy Roaster Grisette, the beer’s autumnal flavor balanced with the tartness of cranberry.

When it’s time to think about next year’s garden, all of the growers agree on the basic steps for drying and saving seed. Get them out of the squash, rinse them, and dry them as thoroughly as possible. Abby Landry uses a simple dishcloth. For big batches, the Longs pop out their window screens to use. Every time you think of it, they suggest, run your fingers through them to mix them up. “You want to get air flow all around, if you can,” says Harold Long, making a gentle sifting motion with his hand. Store them in a cool, dark, dry place. Landry uses her freezer. The Longs use covered bins in a cool corner of their house.

Then, for the Longs, comes the time to package seed. Three generations of their family gather shoulder-to-shoulder at the kitchen table, scooping, measuring, and weighing the seed. The grandchildren return, and everyone has “busy hands,” as Nancy puts it. They may talk, they may listen, they may work in silence, but they are all together.

As we finish speaking that day on their farm, Nancy Long brings a pot of soup out of the fridge. It contains the “three sisters,” the crops traditionally grown together in Native American cultures: beans to replenish the soil with nitrogen, corn whose stalks support the beans, and squash to cover the ground and prevent weeds. The soup is a beautiful creamy orange. Candy roaster, onions, celery, butter, and cream make up its base, and it’s studded with yellow-eye beans and corn. Harold confirms it’s a recipe he’s been eating his whole life. And it’s the perfect thing to warm up a damp winter day. ◊◊

Beth Lassiter lives and writes in West Asheville. She’s expecting to have less grass to mow next year, when the yard is full of candy roasters and Cherokee tan pumpkins. 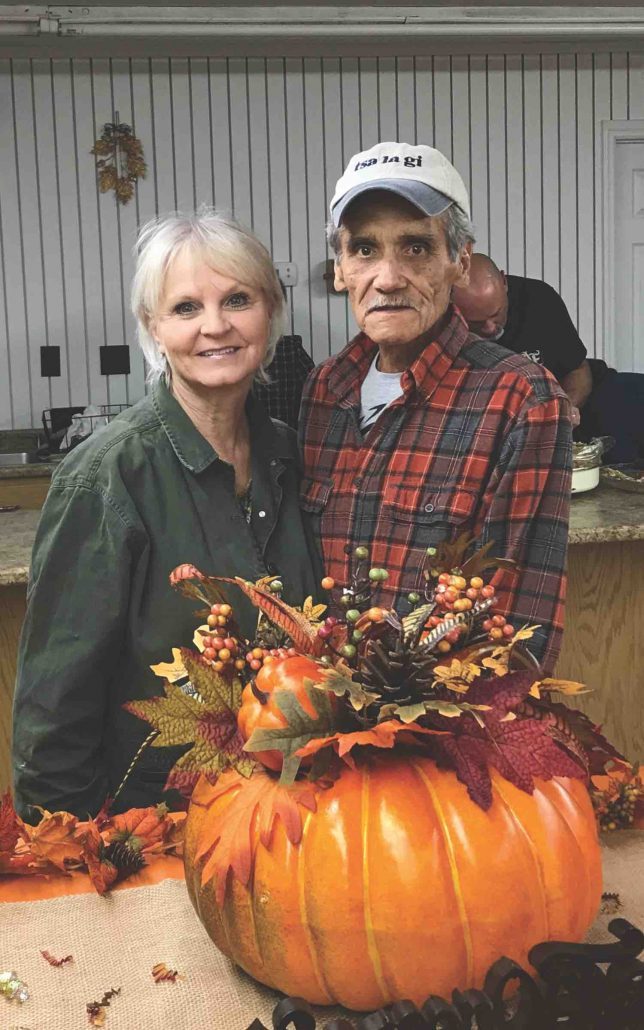 Nancy and Harold Long (Photo courtesy of the Longs)

The Long View
Scroll to top