Planning and planting today, for tomorrow

Several years ago, a longtime close friend from college and his father were visiting. Both live out of town, one in the eastern part of North Carolina, the other in the suburbs of Atlanta, and they’d rendezvoused in Asheville for a father-and-son weekend. A stop by our place in Candler was, thankfully, included in their jam-packed itinerary. My friend Jon’s father is an arborist, and he wanted to walk and explore the trees on our property during his visit. After a hike around the land (we own 11 acres tucked back into a forested cove, and our property is flanked by a 300-acre nature preserve), the temperature started to drop. None of us were ready to surrender our time outdoors just yet, though, so it was decided that starting a blaze in the fire ring on our patio was what was in order.

As we slid on pullover sweaters and tugged knit hats over our chilly ears, arranging chairs and blankets around the fire, Jon began to talk about a new philosophy he’d recently come to embrace. Calling it “the long view,” he relayed the manner in which he’d started to examine all aspects of his life from this vantage point. Career, parenting, friendships, marriage—he’d started looking at them all through the lens of longevity, of incremental change, of deliberation and planning. He explained the comfort he was finding in this approach, of moving slowly, and thoughtfully, and with calculation, all with the future in sight. He was fine if things took time to pan out the way he’d like them to, or even if they changed and morphed in ways he didn’t anticipate or perhaps even prefer. He was looking towards the horizon, and not at his footsteps or shadow.

That conversation stuck with me. Even now, years later, I recall with acute clarity the impact Jon’s words had that evening. At the time, my now 8-year-old son Huxley was around 2. Taking this “long view” direction in my parenting offered an inexplicable solace when Jon articulated it. I thought of all the challenges I faced as a first-time parent, and a parent of a very high-spirited little boy, at that. Instead of wondering if my everyday choices and actions with him were proving effective, I started to step back, examining the overall architecture of my daily interactions with Huxley from a bird’s-eye perspective.

In the long view, it didn’t matter if he’d eaten a minimum of five fruits and vegetables on a particular day, or if he’d had a public temper tantrum over my not conceding to his demand for the Grumpy Cat’s Christmas DVD he spotted at the grocery store. If I’d lost my cool one time when navigating the waters of his 3-year-old volatile temperament, lacking grace and yelling like a woman who had lost all sense of composure and capacity for clear, calm, cogent thinking, the long view took this into account.

This mindfulness of choices extending far into the future, crisscrossing and intersecting with the unknown, made sense to me on myriad levels. Like Jon, I considered the long view in my professional and personal relationships. I thought about the way accepting, or not accepting, certain work offers and solicitations would affect the image and body of work I was carefully curating. I began assessing all new potential friendships through the filter of whether we could weather the long haul together, or if our alliance was fated to be a short-lived one

I also began applying the long view to clothing purchases I made (Will this coat last me through a minimum of 10 winters? Will this purse take the use and abuse I extend to my carryalls over the years?). I then began extending this mindset to furniture purchases for our home (Will this couch hold up to the exuberant jumping of a 3-year-old, a dog prone to sneaking onto it when we’re not at home, and a duo of cats who favors it over their adjacent scratching post?). I even thought about it when considering decorative items for our home (Will this brass platter found at the thrift store, lovely though it may be, actually be used in our home or will it be left to collect dust in the pantry?).

One of the biggest areas I found myself employing the long view was in my garden. While planting annuals is no big deal, as their time is fleeting and can be moved around the garden with ease, perennial items began receiving much more deliberation than I’d previously given them. I started thinking about the shade line provided by the massive tulip poplars flanking the garden, and where things would need to be planted as these already towering trees continued to reach ever skyward. I also felt the pull of the long-view mindset whenever I planted a crop in one season that wouldn’t be harvested or consumed until several seasons later. This was particularly the case with winter squashes.

When I gingerly tucked a butternut, or acorn, or kabocha seed into the earth in early summer, the long view was at the forefront of my mind. Knowing these seeds would have to germinate, push their way up out of the soil, send out tendrils, produce flowers, become pollinated, create fruit, mature into squashes, be harvested, sit out to mature in the late summer/early autumn sun, and then go into storage for consumption and use months later, I could see how I was planting today while planning for tomorrow. That conscious deliberation and consideration of my actions in the present moment determining my actions in the future was made manifest by the simple gesture of planting a seed.

Owing to their toughened outer skin, winter squashes store quite well. Kept in a root cellar or cool, dry area with good ventilation, they should keep for two to three months, or even longer. This is the reason the crops, though grown during the warm summer months, are referred to as “winter” squash, a simple fact that inexplicably took me years to fully grasp for some reason. It’s their firm, thick skin that allows them to last in cold storage when the mercury plummets, the wood stove roars, and the snow falls. Rendered into a warming soup or comforting tea bread, they aim to sustain you all season long.

The long view has become a deeply ingrained part of my entire worldview, affecting and informing the person I am today. In many ways, it reminded me of the Seventh Generation principle of the Iroquois, also known as the Great Law of the Iroquois. This mindset urges those living today to take deep stock of the way in which their actions will affect seven generations into the future. The specific language from The Constitution of the Iroquois Nations: The Great Binding Law reads:

“In all of your deliberations in the Confederate Council, in your efforts at law making, in all your official acts, self-interest shall be cast into oblivion. Cast not over your shoulder behind the warnings of the nephews and nieces should they chide you for any error or wrong you may do, but return to the way of the Great Law which is just and right. Look and listen for the welfare of the whole people and have always in view not only the past and present but also the coming generations, even those whose faces are yet beneath the surface of the ground— the unborn of the future Nation.”

There is so much wisdom to be gleaned from this mindful orientation to living. Whether we’re applying it to matters of diplomacy, matters of the heart, or matters of the stomach, the long view encourages an inclusive, far-reaching approach. A conversation all those years ago about the long view went on to become the way I orient my own internal compass. Here’s to fruitful chats with friends, thoughtful consideration of the reverberating potential of our actions, and the gumption to plant seeds for today that will fill our stomachs, hearts, and souls well into the future. ◊◊

Ashley English is the author of several books, including Southern from Scratch:Pantry Essentials and Down-Home Recipes and A Year of Picnics: Recipes for Dining Well in the Great Outdoors. She lives in Candler, North Carolina, with her husband, two sons, and a menagerie of chickens, dogs, cats, and bees. Smallmeasure.com 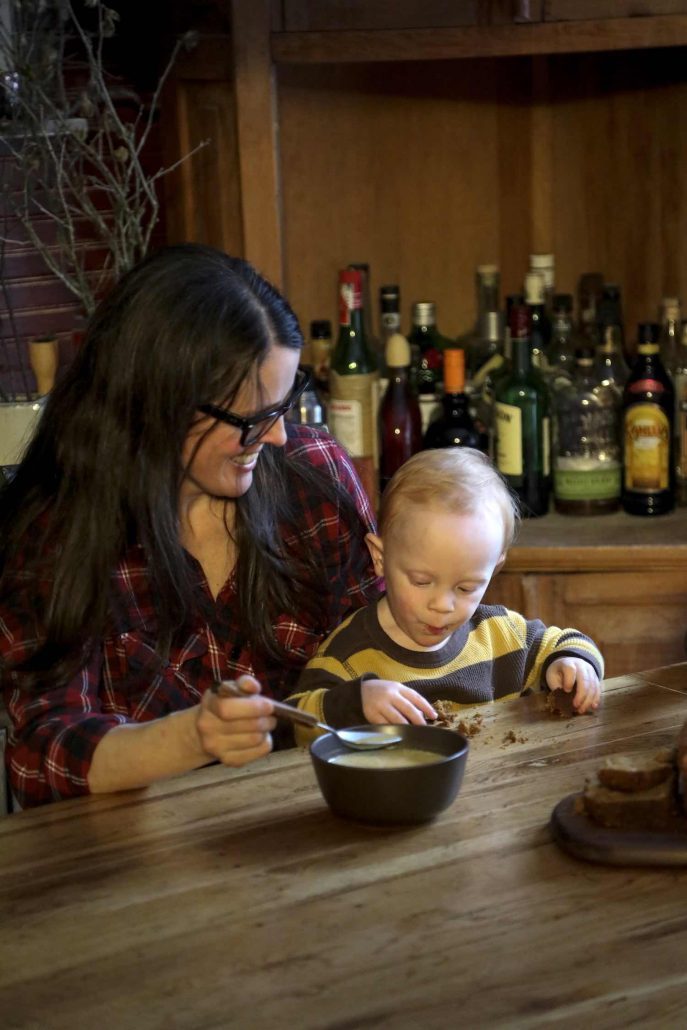 Candy Roasters on the Rise

Bundle up with Beer
Scroll to top