WNC Chefs Take Diners for a Walk on the Wild Side

As many people discovered during the long, strange trip that was 2020, food not only provides sustenance and comfort, but can also function as a sort of sensory magic carpet ride, whisking us away from the mundane. Innovative, new, and unusual dishes offer opportunities to explore beyond well traversed culinary boundaries into intriguing territories of taste, texture, and ingredients. And some chefs love nothing better than to take diners on that wild and exhilarating journey.

Jesse Roque: Turn the Beets Around

Jesse Roque, owner and executive chef of the globally inspired Hendersonville tapas restaurant Never Blue, has built her professional reputation around her unique talent for delivering a mix of comfort and excitement through imaginative and sometimes unconventional fare. She’s a dreadlocked, tattooed, homeschooling mom with an interest in tarot cards, but perhaps the most surprising thing about Roque is that, when it comes to her own food preferences, she prefers to play it safe with what’s on her plate. A self-described “chicken fingers and french fries kind of girl,” the chef says she lives vicariously through the experiences of the guests at her restaurant.

“When I can come up with things that are outside the box or a little avant garde or almost taboo, it makes me immensely happy, because I am such a plain eater,” she says. “I tell people it’s my superpower, because I don’t eat like that; I just was graced with this ability to put flavors together. Thank God, because I can’t do anything else. I love surprising people.”

An Asian salad at Never Blue manifests as Jewels of Bangkok, a mix of heirloom gem lettuces, broccolini, red cabbage, green onions, cauliflower, tart pickled mango, and house-made “Thai peanut potion.” For a shareable snack, Tex-Mex and Cajun flavors fraternize in the Swamp Nachos, which stack andouille sausage and butter-poached chicken with blackening spice on crispy, house-made tortilla chips topped with queso, spicy jalapeno ranch, and green-tomato chow chow. Or one could veer back to an Asian theme with the Korean street fries topped with house-fermented kimchi.

Pickled and fermented tidbits have always been one of Roque’s favorite creative playgrounds. In 2019, she began showcasing that fascination at Madame Roqué’s Meat Emporium and Pickled Curiosités, a combination restaurant/tattoo parlor/ tarot-reading salon/drag show venue near Never Blue. Unfortunately, that venture was a casualty of the pandemic, but the chef is gearing up this summer to take the food aspect of that show on the road—minus the focus on meat—with Madame Roqué’s Pickled Curiosités food truck.

Particularly popular among her “weird pickled items,” says Roque, are Thai lemongrass pickled lotus root and pickled fennel root with juniper and jaggery, a golden-brown cane A lot of diners initially request the Tarpon Springs Greek salad at Never Blue and Madame Roqué’s without Roque’s chardonnay-ginger pickled beets. “I say, ‘We’ll put the beets on your salad, and if you don’t like them, I’ll buy your salad,’” Roque says. “They’ll try them and say, ‘Oh, my god, I love these beets! You’ve changed me.’ sugar. “It tastes like a sweet, pickled gin and tonic,” she says. And some guests are swayed by Roque’s chardonnay-ginger pickled beets, which are featured on the Tarpon Springs Greek salad at both Never Blue and Madame Roqué’s.

A nod to the chef’s Tampa, Florida, roots, the hearty salad features the usual mix of lettuces and greens with kalamata olives, shaved red onion, and feta cheese plus, in true Florida fashion, the notable addition of vinegar and mayonnaise potato salad (made with Roque’s mother’s recipe) and the pickled beets. A lot of diners, she says, initially request the salad without the beets. “And I say, ‘We’ll put the beets on your salad, and if you don’t like them, I’ll buy your salad.’ And they’ll try them and say, ‘Oh, my god, I love these beets! You’ve changed me.’

“I think that everybody has their niche, and for me, my niche is surprising people,” Roque continues. “[I love it when people] say, ‘Wow, this stuff looks weird, but it tastes really good.’ I really love the fact that I can turn somebody’s day around, even with something like a beet.”

Lisa Smith-Vann and Ben Krueger: A Taste of Island Magic

Set to debut later this summer in the Grove Arcade in downtown Asheville, Huli Sue’s BBQ and Grill embraces homey comfort in broad strokes with its menu of Texas-inspired barbecue, sustainably caught seafood, seasonal vegetables, and old-fashioned cakes and pies. But in the finer details, owners Lisa Smith-Vann and Ben Krueger will provide guests with an exotic taste of Hawaii, the state where they lived for 15 years before moving to Asheville a year and a half ago. 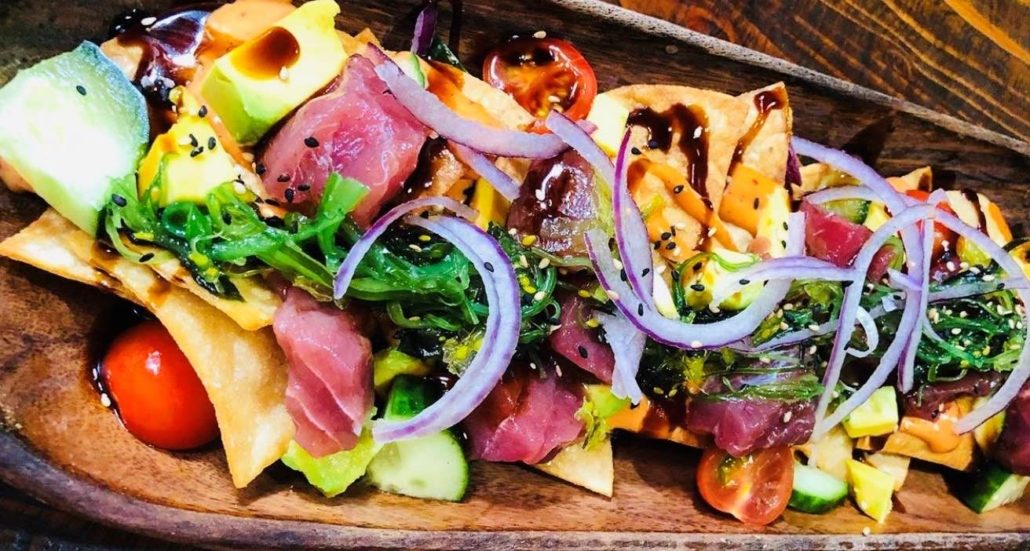 Smith-Vann and Krueger, who also own The Fish and The Hog in the town of Waimea on the Big Island of Hawaii, are weaving Pacific Rim flavors throughout their menu at Huli Sue’s, starting with their poke. “Poke is everywhere now, but it’s still hard to find traditional poke,” says Smith-Vann. “Our poke is definitely a little bit different from what people are used to here.”

Authentic Hawaiian poke, she explains, features diced fresh fish—it could be yellowfin tuna, marlin, wahoo, snapper, or mahi-mahi— on sushi rice with soy sauce, garlic, sesame oil, kukui nuts, or toasted macadamia nuts. As for some of the recently popular poke bowls that include chicken, shrimp and other items? “That’s not poke,” says Smith-Vann with a laugh. “Not where we’re from.”

As the Huli Sue’s pitmaster, Krueger specializes in Texas-style beef brisket, baby-back ribs, pulled pork, and chicken. But he doesn’t worry too much about staying true to the Texas theme when it comes to the sauces, which riff on well known Kansas City, Memphis, Texas, and Carolina sauces, but often incorporating flavors and ingredients popular in Hawaii.

He encourages Asheville locals to try his curry-flavored barbecue sauce, which is best paired with beef. On the sweeter side and usually paired with pork is Krueger’s crack-seed sauce, made ling hi mui (a preserved Chinese plum that’s popular as a snack in Hawaii). “It’s used in candies usually, but we incorporate it into some of our items,” Smith-Vann explains. “Ling hi mui is an interesting flavor and very representative of Hawaii.”

Krueger also urges Asheville locals to try a traditional spicy Hawaiian condiment he makes called chili-pepper water. The name sounds fiery and a bit exotic, but the taste might feel close to home. “North Carolina uses a lot of vinegar sauces, and chili-pepper water is vinegar with water, garlic, and ground chilis. Traditionally, there’s one chili pepper that’s grown pretty much only in Hawaii that’s used in the sauce, but really you can use any kind,” he explains. “Hawaii is a lot like the South in many ways.”

Just stepping into Neng Jr.’s, the restaurant chef Silver Cousler plans to launch late this summer in West Asheville, promises to be a bit of an adventure. Tucked behind the soon-to-open creative hub Different Wrld in the rear of the building that previously housed the Mothlight concert venue, the tiny, 17-seat dining room will have an off-street, back-door entrance. Popping with vivid colors and anchored by a bar with malt shop-style stationary stools, the interior—designed by Shelter Collective—conveys a bright, progressive-meets-nostalgic vibe.

But the food itself will be the real journey at Cousler’s restaurant. The chef, who uses they/them pronouns, plans to offer a menu inspired by the traditional cuisine of their mother’s native Philippines. From a takeout window in the kitchen, Cousler will serve a tight, fast-casual, to-go menu of accessible and transportable items such as lumpia (a type of eggroll) and sinangag (a tamarind soup). But in the dining room, guests at the handful of tables will be able to choose from a constantly changing menu of Filipinx specialties refined and embellished by Cousler’s imagination and grounded in locally grown and foraged, seasonal vegetables and meats. (Filipinx is a gender-nonspecific term replacing the masculine “Filipino” or feminine “Filipina.”)

Restaurants dedicated to the cuisine of the Philippines are few and far between in the Southeast, and Neng Jr.’s is the first in Asheville, so Cousler is sensitive to the fact that their menu may push the boundaries of many local palates. But with high-quality sourcing, freshness, and food safety top priorities for the chef, they hope guests—both Philippines natives drawn to a taste of home and those who’ve never experienced Filipinx cuisine—will be excited to try some of their favorite dishes.

Kinilaw is one example. An avid fishing enthusiast, Cousler is looking forward to serving Neng Jr.’s diners this snack of fresh, raw fish marinated in vinegar. “When I’m thinking about food that’s exciting to me, I’m thinking about raw fish—I’m thinking about kinilaw. It’s a standard raw Filipino fish dish, a ceviche basically.”

Fresh, locally grown bamboo shoots are another unusual item the chef is eager to share with Asheville. “It tastes just like artichokes,” they explain. “[Canned] bamboo shoots have this urine smell; it’s not the same as a fresh bamboo shoot where there’s no odor at all, maybe just a little woody smell.”

But Cousler also wants to highlight Filipinx flavors that American palates could find a bit more challenging, such as house-made salted duck eggs. Intensely pungent and salty, these are usually served chopped and mixed with raw onion, tomato, and fish sauce and served as a side item or condiment. The chef is also working on perfecting their recipe for bagoong, an oily fermented shrimp paste that they describe as “a very abrasive flavor.”

“It’s something my Lola makes, who is my mom’s mom, and it’s just so good,” Cousler says. “For my mom, it’s always been a sense of pride for her that I’ve loved it since I was a baby. And I’m really excited to feed Filipinos this one snack that I like to have, which is just a piece of seaweed with rice and a little tiny dollop of bagoong.”

Aware that some diners may be confused or intimidated by unfamiliar Filipino names and ingredients, Cousler is planning a service model based on direct verbal interaction between staff and guests. “I kind of want to avoid all the Googling,” says Cousler. “I’d rather just talk to people, because I think it’s the best way to communicate what a dish really is.”

They hope this approach will encourage people to be more adventurous about trying new and unusual foods. “This place is so small that it’s possible to be this intentional,” Cousler says. “Intimacy is the goal. I just want people to feel at home, but also to feel like, wow, this is really nice.” ◊◊

Gina Smith is a writer, editor, and community collaborator who’s been gathering and telling stories since before she could even hold a pen. She served nearly seven years as the food editor at the Mountain Xpress alt-weekly newspaper in Asheville and continues covering restaurants, food justice and farming in Western North Carolina as features editor at Edible Asheville. 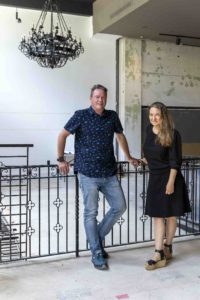 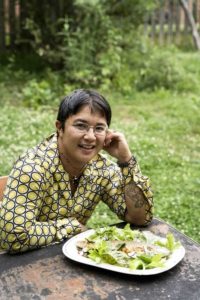 EATING WITH THE SEASONS