A HERO OF HOSPITALITY

In a city that relies heavily on hospitality workers, Glynna Slater shares the rewards of the career

It was Thanksgiving in 2020, and the kitchen staff at Ruth’s Chris Steak House in Asheville had accidentally forgotten to put a serving of pumpkin cheesecake in several holiday dinner takeout “bundles” that had been picked up by customers that day. The restaurant was alerted to the problem when one family called and told the staff they were missing their holiday dessert.

So Glynna Slater, who is now the general manager of Ruth’s Chris, tracked down each of the guests who’d picked up an incomplete bundle, called them at home, and offered to personally deliver the pumpkin cheesecake to their door. A handful of them accepted her offer, and one of those who did would later write her a hand-written thank-you note and tell her that her kind of service was so rarely seen these days—and yet greatly appreciated.

“That guest told us she’d remain a customer because of that, and she did,” Slater says. “She ordered her Thanksgiving dinner from us again last year.”

For Slater, that type of service—or “hospitality,” as she calls it—is a big reason why people go to restaurants, hotels, resorts, country clubs, casinos or just about any other business where they expect a pleasant experience, in addition to just a good product.

“For restaurants, you have to know why people come for a nice dinner,” Slater says. “It’s all about the experience.”

Slater discovered an early appreciation for the hospitality industry just a few days after she turned 15. Living in her hometown of Columbia, S.C., and eager to start earning money for a car, she took a job as a carhop at Sonic Drive-In. Although quiet and shy by nature, she realized the interaction with customers pulled her out of her shell, and she cultivated a natural gift for making others feel comfortable and valued.

After high school, she continued to seek out restaurant jobs, gravitating toward higher-end steak and seafood restaurants that offered good food to their guests and a fast-paced environment for their employees. In 2014, just one year after she and her husband moved to Asheville, Slater realized she wanted to formally pursue a long-term career in the restaurant industry—knowing that a guest’s opinion of a restaurant hinged just as much on the performance of the front-of-house staff as it did the kitchen crew—and she enrolled in A-B Tech’s hospitality management program.

While at A-B Tech, Slater learned the ins-and-outs of the industry—from creating budgets and analyzing costs of goods to developing sanitation standards. She learned why hotels remodel their interiors so often (because guests gravitate toward the most modern looks) and why restaurants choose certain colors over others for their interiors (yellows and reds convey vibrant and happy atmospheres, while blues are more somber and are often avoided).

Slater believes the school’s two year program accelerated her career path in a remarkable way, saying “it would’ve taken me years in a job to get that amount of knowledge.”

Slater first joined Ruth’s Chris Steak House in 2014, shortly after visiting the restaurant while on a networking field trip hosted by A-B Tech. In the years since, she’s been a bartender, a key manager, and held roles in sales and marketing. In 2021, she became the general manager. In all of the roles, Slater says she leans on the skills and standards of service she learned at A-B Tech and credits the professors for becoming role models she still looks to today.

“I had nothing but great experiences at the program,” she says. “I loved every minute of it.”

Slater often recalls specific nuggets of advice she received at A-B Tech to maintain her own standards for service, and she teaches them to others. “One professor used to always say that there’s a right way to do things, a wrong way, and then the only way,’” Slater says, explaining that the “only way” is the way that puts the guest’s needs before all else.

“A while ago, I said that to a new server’s assistant, who wanted to know whether she should’ve abandoned her serving tray, which was already on a stand, to go show a guest to the bathroom. And yes, I told her, that’s the only way.”◊◊ 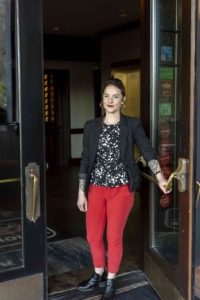 Ties That Bind
Scroll to top