Recognized as a “top chef” by Zagat, chef Brian Crow builds a celebrated career in the kitchen

When Brian Crow was 13 years old, he was already working in a professional kitchen, starting off as a dishwasher and then a cook at a local summer camp. About a decade later, he’d be cooking for a U.S. president.

Crow is one of those people who knew from an early age what he wanted to do in life. As one of seven children, he expressed an early interest in what his Mom was cooking and how she was doing it. He learned how to gut and fry up catfish, which he himself would pull out of the lakes and streams near his hometown of Brevard; he learned that fried chicken made with bacon grease delivered a little extra love and that he could use up the odds and ends in a refrigerator by adding it to fried rice and cooking it with a scrambled egg.

While still in high school, Crow became a line cook at the former Corner Bistro in Brevard and found a mentor in the executive chef, who encouraged him to formally pursue the path he was meant to take. “I remember him pulling me aside and saying, ‘if you’re going to be a chef, you need to just go to culinary school,’” Crow recalls.

Nearing high school graduation, Crow researched the country’s top culinary schools, including the award-winning culinary program at A-B Tech, which boasts a long record of turning out highly successful chefs and bakers. After taking a tour of the campus, Crow was drawn to the instructors’ focus on professionalism, and “I appreciated that,” he says. “At that point in my life, I needed that.”

Crow enrolled at A-B Tech’s culinary program in 2006 and discovered that the instructors had high expectations of him and other students, and he worked to meet them. “The chef instructors, I think they saw potential in me, and they challenged me,” Crow says.

While enrolled at school, he took a job at the former Boathouse Restaurant on Lake Julian, where he fine-tuned his abilities to cook seafood. He then took a job at Corner Kitchen in Biltmore Village, where he had the opportunity to cook for President Barack Obama and his wife, Michelle, who were visiting Asheville in 2010. President Obama ordered the mahi-mahi with coconut rice and snap peas, and Michelle ordered the lobster tacos. “I got to shake both of their hands,” he says.

In 2011, Crow moved to Denver with his wife in pursuit of a change of scenery. Within a month of arriving, he landed a job as executive chef of a popular cafe called Devil’s Food Bakery and Cookery. It was his first time being the boss, at just 24, and it gave him the know-how to move on to his next role as executive chef of the newly forming Bacon Social House. He was recruited to help launch the restaurant in 2014, taking charge of everything from creating the menu, hiring staff, and even weighing in on the design of the building. Shortly after, Zagat Magazine named him one of “top 30 chefs under 30” in the region.

By 2017, Crow was ready to return home to Western North Carolina, and he accepted his current role as executive chef of Chestnut in downtown Asheville. He credits the restaurant’s focus on local and seasonal ingredients as a key component in attracting a broad base of loyal customers and retaining talented chefs in the kitchen.

Relying on the bounty of local food—including produce from Mountain Food Products in Asheville, trout from Sunburst Trout Farms in Waynesville, and cheese from Three Graces Dairy in Marshall—Crow changes the menu at Chestnut on a monthly basis.

“We live in an area that is very seasonal, with passionate farmers who make my job easy. My goal is to try to push those flavors all the way to the edge,” Crow says.

Having graduated from A-B Tech over a decade ago, Crow continues to rely on the school for new batches of talented chefs who staff his kitchen. Two of his sous chefs are A-B Tech grads, as are many of the line cooks. “I’m honored to be an AB Tech alumni,” Crow says, “and I’m grateful for the opportunity that helped create the foundation of my culinary career.”◊◊ 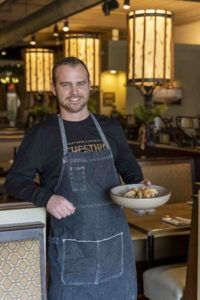 Taking the Cake
Scroll to top