The Sweetness of Summer

A Honey Cocktail From Hive to Glass

The Norma Desmond cocktail at Sovereign Remedies in downtown Asheville is an elegantly refined glass of adult refreshment. Named after Gloria Swanson’s delusional film-noir diva from Sunset Boulevard, the new spin on a pisco sour tops its amber haze with airy meringue, a fantasy of sunset crowned in clouds. But a key element of this grown-up concoction has its roots in a childhood disappointment: a little girl’s parents wouldn’t buy her a horse.

The girl in question is Kim Ramsey, co-owner of Jewel Hill Farms in Marshall, which produces the honey used in the Norma Desmond and other cocktails at Sovereign Remedies. She says that her equine desire provided the initial spark for her husband, Ernest, to revisit farming on land that has been in his family for five generations.

“I grew up in the Asheville suburbs, and I had always begged my parents for a horse, which, of course, we couldn’t have,” Kim recalls. “So when I got married to Ernest and he had this farm that he wasn’t really doing anything with, I started my ‘can I have a horse’ campaign back up!”

Kim got her horse, and the farm got a new mud hole from the pounding of the horse’s hooves. The Ramseys turned the horse’s damage into a farm pond, then put in an orchard of fruit trees and berry bushes. With the orchard came the need for pollination, so the couple began experimenting with honeybees.

Although Ernest’s grandfather had kept a couple of hives on the property many years ago, the Ramseys knew little about beekeeping before starting in 2011. Kim says that their biggest challenge has been managing the growth of the operation to ensure sure they could keep up with the energetic efforts of their buzzing workers.

“You can be a small beekeeper with two hives and use handheld spinners to extract honey, but once you get over a certain number, you really need some kind of centrifugal force spinner because it’s way too much labor,” Kim explains. “Each year, we’ve added a piece of equipment and built the operation up.”

Jewel Hill Farms now hosts roughly 30 beehives, and the Ramseys harvest enough honey from them during mid-June through late August to meet demand for the rest of the year. The bees range freely over orchard, pastures, and forests, as well as those of the farm’s neighbors, to gather their raw materials; Kim estimates that “if you sent in a sample for testing, I’m pretty sure our honey would have around 72 different pollens in it. It’s all just wild, local honey every time.”

Ernest and Kim sell their product primarily through the Asheville City Market, where Sovereign Remedies executive chef Graham House is a regular shopper. The restaurant sits just south of the market’s Saturday setup on North Market Street, allowing House to easily grab the freshest possible ingredients for his kitchen every week. When Kim approached him one morning with an offer to be a consistent source of local honey, he couldn’t refuse.

“The honey we were getting before wasn’t local, and Jewel Hill sold it in these special buckets with taps on them,” House says. “When you’re going through as much as we do, that matters.”

“Sugar has to be in a drink for balance, but when you’re getting into really highlevel cocktail making, you consider the quality of that sweetness,” Dubois says. “Refined sugar tends to be very sweet and bright, while honey has richer round notes but still adds the sugar you need to balance out the tartness of your other ingredients.”

To counter honey’s notorious stickiness—“You can be sitting and waiting for it to drop out of your jigger for 25 minutes,” Dubois notes with a laugh—the Sovereign Remedies staff makes it into a more manageable simple syrup. By combining honey with water over heat, taking care not to exceed 120° Fahrenheit so its flavors are preserved, mixologists create an easily pourable building block for classic drinks such as the Bee’s Knees and new tipples such as the Wet Hot American Winter.

In the Norma Desmond, however, Dubois employs the viscosity of the ingredient as an asset. He combines honey, egg whites, and cynar (a bittersweet Italian herbal liqueur made primarily using artichokes) in a whipped cream canister, then uses a carbon dioxide charger to whip the mixture into a foam. The result gets sprayed atop the cocktail’s base of pisco, lemon juice, and chickweed-infused simple syrup and stuck through with a bright green sprig of fresh chickweed.

“Honey was the perfect agent to sweeten that foam,” explains Dubois. “It gives just right amount of sweetness, and its viscosity helps to bind all those elements together while not outweighing the cynar, which is a little tart.” The foam also slowly sinks into the liquid below as the cocktail sits, allowing the honey to bring its complex smoothness into contact with the tang of the lemon juice.

At home, the Ramseys are more likely to use their honey in smoothies than in mixed drinks, but they appreciate the creativity that the Sovereign Remedies team has brought to their product. They’ve even taken some of their payment in gift card form to enjoy bites and cocktails from the eater’s point of view.

“They’ve been really great customers,” Kim says. “And we do enjoy eating there, too!” ◊◊

Daniel Walton is a staff writer for Mountain Xpress, covering local government, the arts, environment, and sustainability beats. His work has previously appeared in Capital at Play, Carolina Home + Garden, and the Citizen-Times. He takes his honey with tea just about every single morning. 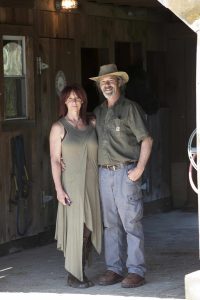 Kim and Ernest Ramsey of Jewel Hill Farms in Marshall. 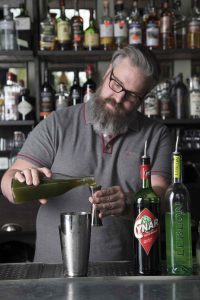 Blooming in WNC
Scroll to top