In partnership with Well Seasoned Table

THE LIFE OF SPICE

By the time I arrived at my sister’s house, she had already started her famous weekly meal-prep session. There were two cutting boards on a large island in the center of the kitchen, multiple knives and mixing spoons, mounds of onions, peppers, sweet potatoes and greens, and a giant bowl of discarded cores, seeds and skins. There was something bubbling on the stove and the oven was being preheated for its weekly workout.

My sister, who is the definition of organization and efficiency, devotes three to four hours each weekend to preparing meals for the week ahead. She puts together the foundations for salads, soups and stews, her culinary staples depending on the season, and then tests the limits of her refrigerator with stacks of Tupperware.

While I don’t typically cook this way, I decided to join her on a delightfully sunny Saturday for an experiment of sorts. I had recently gotten a variety of seasonings and spice blends from the Candler-based Well Seasoned Table, and I was eager to try as many of them as I could. I couldn’t think of a better way to sample their multiple offerings at once than the assembly line of dishes at a weekly meal prep.

If you aren’t familiar with Well Seasoned Table, this local company—founded in 2014 by Sarah and Clinton Wickers— has quickly become the go-to source for local herbs and spices, winning a fan base among chefs, home-cooking enthusiasts, and professional food producers in Western North Carolina and beyond. With 80% of its ingredients coming from Appalachia, including wildcrafted items and ingredients from its own farm, Well Seasoned Table features the genuinely unique flavors of our region. You’ll find garlic from Gaining Ground Farm in Leicester, salt from Celtic Sea Salt in Arden, and roasted cacao from Asheville’s own French Broad Chocolates.

The Wild Green Goddess Seasoning is among the most popular of the Well Seasoned Table’s blends, featuring wildcrafted greens and ramp leaves, farm-grown herbs, garlic, shallots, black peppercorns, celery seed, and Celtic Sea Salt. We decided to use this earthy blend in roasted vegetables, which is popular in both my home and my sister’s home for topping on salads with goat cheese and a vinaigrette, or perhaps with plantain croutons and sunflower seeds. Heading into early spring, we used red onions, beets, sweet potatoes, and carrots, adding a bit of EVOO and a liberal sprinkling of Wild Green Goddess. We roasted everything in the oven at 400° for 20 minutes, and the taste was very satisfying and added a rich depthness to the veggies.

The Farm-House Herbs and Roasted Garlic Seasoning is another versatile blend, featuring the savory combination of roasted garlic, oregano, wild thyme, sage and rosemary, along with hints of fennel leaf and calendula. It works particularly well on roasted potatoes, to which we added red and yellow peppers, red onions and fresh rosemary. For a hearty breakfast, you can layer the potatoes on a plate and top them with two fried eggs. 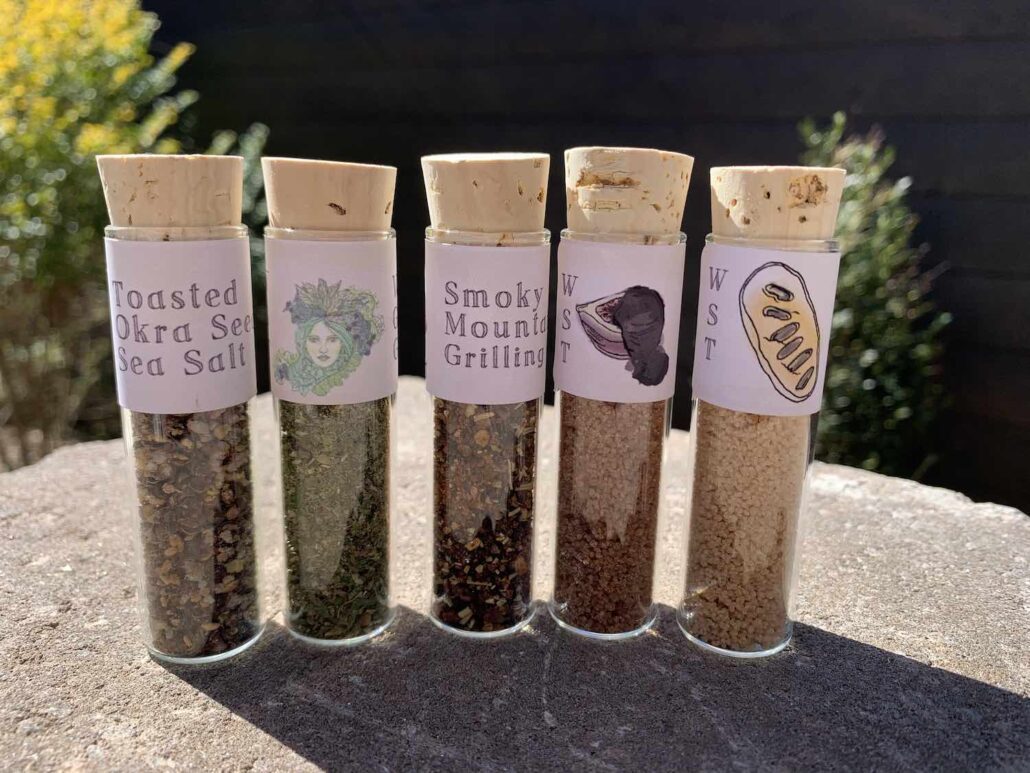 The Well Seasoned spice blends are noteworthy for their ability to complement and enhance the flavors in a dish, not overpower them. If you’re looking to embrace the seasonal foods of Western North Carolina—the fresh greens of spring or the ripe tomatoes of late summer, local grass-fed beef or artisanal cheese—these herbs and spices provide just the right amount of added flavor.

You can also rest assured that all foraged items are harvested sustainably. Founder Sarah Wickers has a degree in Ecology & Environment Biology from the University of North Carolina atAsheville, with a concentration in native plants. She knows exactly what she’s looking for and never takes more from the forest than what is ecologically responsible.

I was particularly impressed with the Toasted Okra Sea Salt, which we added to a chicken salad for a really unique and tasty flavor. We used canned chicken for this, adding just a bit of white onion and chopped celery, mayo and a dash of the Toasted Okra Sea Salt. It made a quick and easy snack, particularly nice with gluten-free crispbreads, and scored big points with my family as sandwiches.

We added Wild Mushroom Sea Salt with Ramp Flakes to chicken meatballs and found a number of ways to eat them throughout the week. Starting with two pounds of ground chicken breast, we added sauteed mushrooms and onions, fresh sage, a bit of bread crumbs and an egg, and then also the Wild Mushroom Sea Salt. We rolled them into two-inch meatballs and put them in the oven at 400° for 20-25 minutes until cooked through. We even cooked another batch of chicken meatballs, this time using the Well Seasoned Table’s Taco Seasoning, and ate them on corn tortillas with a sprinkling of cheese.

If you’re looking to update your spice cabinet and introduce the flavors you’ll find at local farmers markets, there are few better options than the Well Seasoned Table. They make thoughtful gifts, too. The packaging is just beautiful and the spectrum of teas and infused sugars would be a much-appreciated housewarming gift or a nice way to thank a backyard dinner party host. ◊◊