The Flavors of Home

In the turbulent time surrounding the fall of the Soviet Union in 1991, Tatyana Andronova was a political refugee looking for a new life in the United States. Almost by chance, her path led to Western North Carolina, where she opened Euromarket, Asheville’s largest store focused on culinary items from Eastern Europe and Russia.

Located off Patton Avenue in West Asheville, Euromarket reflects the diverse cultures of the former Soviet Union, with wines from Moldova and the Republic of Georgia, along with smoked fish from the Baltic countries. It also offers staples of Soviet—and sometimes pre-Soviet—cooking that have remained popular throughout many countries to this day, such as grechka, or buckwheat.

Andronova claims she and her ex-husband were “the first Russian-speaking family in Western North Carolina,” but it wasn’t her intention to be so. In 1992, they were political refugees who had been granted asylum in the United States. The couple was at an airport in Moscow, waiting to board a plane bound for New York City and ultimately Baltimore, a large city that they thought would be their new home.

There was a delay at the airport, forcing them to take a later flight, and their seats were given away to another family. They arrived in New York expecting to make the connection to Baltimore, only to be told that their final destination was Asheville, a relatively small city in the mountains of North Carolina they had never heard of. The pair arrived at the Asheville airport around two o’clock in the morning. By 6:30 a.m., her ex-husband, who had been an engineer in the Soviet Union, was already at his new job mowing grass.

Andronova and her current husband, Vadim Apolka, opened Euromarket in Hendersonville in 2005, moving to West Asheville just six months later to be closer to their diverse customer base.

“From the first day, we were packed,” Andronova says. Initially, the store stocked items from all over Europe. And while it still carries some broader European items, like cheeses from Finland and chocolates from Germany, Andronova and Apolka now focus on foods they know from their own heritages growing up in the former USSR. Andronova was born in Azerbaijan, then a part of the Soviet Union, to a Russian father and an Armenian mother. She later moved to what was then Leningrad, now St. Petersburg, before coming to the United States. Apolka emigrated from Minsk, Belarus, in 1997.

Teas line the shelves of Euromarket, along with various honeys and other accompaniments. Among them are sushki, a small, hard, doughnut-shaped bread that’s mildly sweet; pryaniki, gingerbread or spice cookies often made with rye flour; and an array of always-popular and well-stocked chocolates. Cakes direct from Ukraine and Moldova, as well as Russian bakeries in New York, are also top sellers. Among the more popular ones are medovik, a layer cake made with honey and sweetened condensed milk; pyanaya vishnya, literally “drunken cherry,” which is similar to Black Forest cake; napoleon, a layered cream cake initially created to celebrate the 100-year anniversary of Napoleon’s defeat; and skazka, which is a rolled tort with a creamy filling.

The winter holidays are an especially busy time in the store, particularly two or three weeks before Thanksgiving, when members of the local Ukrainian and Moldovan churches, as well as other religious institutions with large Eastern European congregations, start to stock up for big holiday meals.

For former residents of Russia and Eastern Europe, Euromarket offers a taste of home. Kolya Zadnapskiy, a customer from Ukraine who immigrated to the States in 1995, is partial to Kiev cake, a layered, airy dessert with a cream and nut filling and namesake to the city in which he was born. The cake is often served during the holidays, along with various candies and, he adds, “a lot of sausages.” All the better to feed him, his wife (who hails from the Republic of Georgia), and their ten children.

Vassily Cernomorcenco, an employee at Euromarket who worked as a cook in his native Moldova, also celebrates the holidays with dishes from home. Sarmale, grape leaves stuffed with rice and meat, might make an appearance, along with a dessert such as kushma, named after a pointed hat made from sheep wool, which features bliny layers rolled around cherries and stacked in a pyramid. And, of course, the ultimate Moldovan staple, which appears on holiday and everyday tables, mămăliga, a polenta-like dish made from cornmeal and served as both a side and, sometimes, an entrée with ingredients like cheese, meat, and sour cream.

“This area is awesome,” Andronova says about her adopted home of West Asheville, which attracts a wide base of people interested in health, as well as an immigrant population. And both make for a steady stream of customers. The store may be focused on communities from Eastern Europe, but as Andronova says, “We welcome everyone.” ◊◊

Hardie Duncan is a writer living in Asheville. Previously based in Russia, he has worked with VICE, among other outlets. 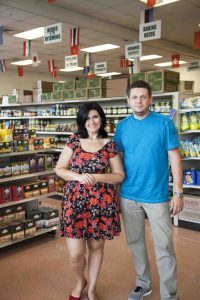 Tatyana Andronova and her husband, Vadim Apolka, are the owners of Euromarket.

Bringing Spice To The Mountains

All In The Sauce
Scroll to top