The cuts of beef that everyone knows about—the ribeye, tenderloin, and porterhouse among them—can be seasoned with salt and pepper, seared over flame, and easily enjoyed. That’s why they’re found in most grocery stores and restaurants, served alongside roast potatoes and broccoli as a cornerstone of the American diet.

But there are also the cuts that Chop Shop Butchery manager Robert Jones calls the “cool cuts.” These are the cuts from the shoulder, the round cuts, tongue, cheek, and even other less-common parts like organs and bones that whole animal butchers offer to customers and find delicious ways to prepare and enjoy.

When an 800-900 pound steer is loaded off a truck at Chop Shop—having already been slaughtered and dry aged for 21 days—a team of skilled butchers cut and package just about every part of the animal. Working from quarters of the steer, they’ll restock the case with steaks, prepare ground beef, set aside bones for stock and individual sale, and render fat into tallow.

“When we say ‘whole animal,’ we don’t just mean we bring in a whole animal—we mean we use it all,” Jones says. “Everything we can find a way to use, we will do it.”

The popular cuts go fast. Chop Shop has a reputation for offering local, humanely raised, with top-notch flavors and textures. The offerings, now posted online for pre-order and pickup or delivery during the pandemic, include mouth-watering steaks, roasts, and ribs. But even the less-common cuts have a loyal following, and nearly half of all customers walk away with something they may never have heard of before.

The teres major, also known as the petite tender, comes from the shoulder and is second only to the prized tenderloin in terms of tenderness. The 10-ounce steaks require a skilled butcher to remove from the animal, but they’re worth the effort. The picanha, a Brazilian cut that’s at its best when cooked over a wood fire, is also a crowd favorite.

In a whole animal butcher shop, every cut can be identified and traced to its source. In the case of Chop Shop, the source is Apple Brandy Beef in Wilkesboro, a third- generation family farm where Hereford and Angus cattle are born, pastured and finished on corn for the beautiful marbling that many diners expect. The meat is dry-aged in a temperature-controlled room, allowing it to become more tender, and the flavors more rich and concentrated.

For consumers, a whole animal butchery offers the chance to explore and experiment. Beef tongue can be braised with garlic and mixed with onions, salsa, and avocado for tacos de lengua, while cheeks make a delicious barbacoa, served on corn tortillas with onions and cilantro.

Chop Shop also offers a few organs. “Beef hearts do well on a grill, and everybody loves a good kidney pie,” Jones says.

Marrow bones, becoming increasingly popular in the U.S., can be split lengthwise and roasted on a foil-lined baking sheet at 450° for 15 minutes. The warm marrow can be spread on toast and topped with sea salt. Fat around the kidneys, or suet, is rendered down to tallow, which is then offered for sale in frozen blocks and prized for its high smoke point when used for frying.

For anyone curious about the “cool cuts,” and seeking advice on how to prepare them, Jones says they just have to ask. “We all here have a lot of experience and want to share the knowledge.” ◊◊ 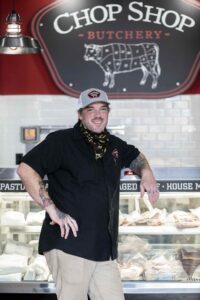