Many types of legumes grow in Western North Carolina. The classics are snap or snow peas in the spring, bush or pole beans in the summer, and fava beans, which are an easy overwintering option for year-round growers. Gardeners rooted in Appalachian tradition might be growing greasy beans, while the adventurous may try their hand at lentils, chickpeas, or bambara beans. Peanuts will grow in WNC but prefer the sandier soils of Piedmont and Coastal Carolina over our mountain clay. However, the crop that should be at the top of every gardener’s summer legume list is the Southern pea. And yet, it is often over-looked or undervalued.

Southern peas (Vigna unguiculata) have many common names, including cowpeas, field peas, crowder peas, and sometimes just peas. Black-eyed peas are the most well-known variety of Southern pea, perhaps made famous by the Southern tradition of eating black-eyed peas and collard greens on New Year’s Day: peas for luck, collards for money. 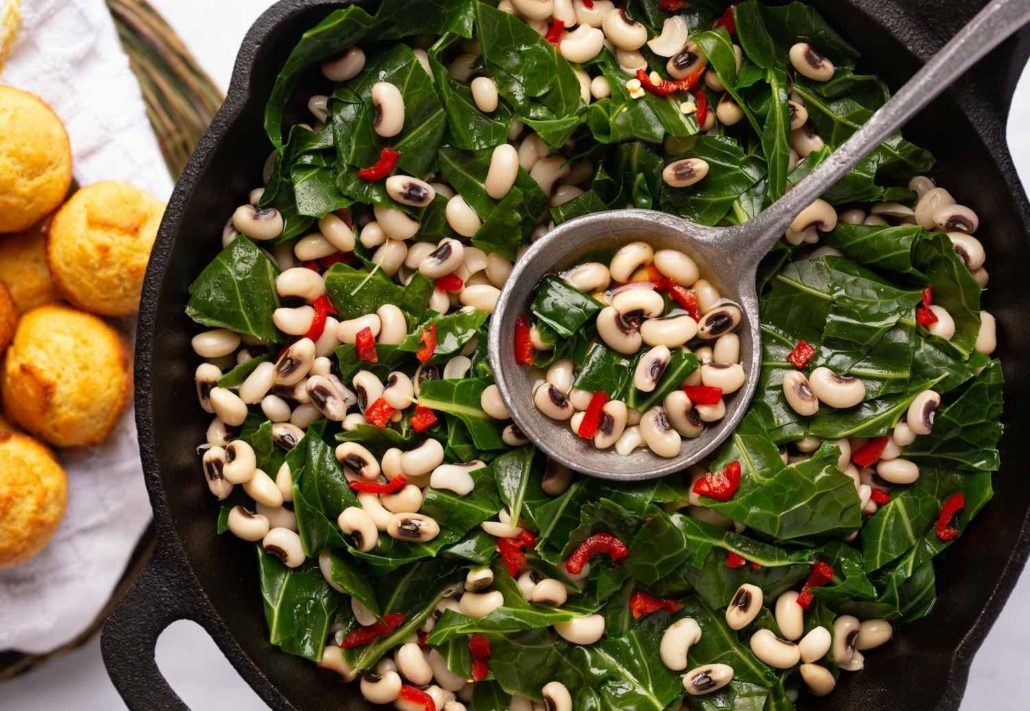 There are no Southern peas growing in the middle of winter, but they dry down in their pods and store easily like any other soup- style legume. In the middle of summer, when the plants are vining and producing pods in v-shaped pairs, the freshly shelled young peas have the taste of a green peanut and are a delicious addition to summer salads or succotash.

There are an incredible number of Southern pea varieties beyond the black-eyed pea. Some favorites include Sea Island red (a small red pea), hog brain (a two-tone ode to the clever pig), whippoor- will (a widely loved speckled pea) and the Carolina crowder. Rice peas, also known as lady peas, are a subcategory of small, delicate white peas.

In 2019, the Utopian Seed Project, a local non-profit that sup- ports crop diversity, hosted a tasting of forty heirloom varieties of Southern peas. One was a type of lady pea from Florida called the conch pea, reportedly much loved in the later part of the 1800s. Dr. David Shields, a culinary historian who attended the event, described the conch pea as “the most delicate pea in the tasting, with sublime creaminess and a freshness unmatched. The small size was also winning.”

As well as performing well on the plate, the Southern pea offers the home gardener the major advantage of being tropical in origin. Botanists have placed their genetic homeland in the Niger River Basin of West Africa. Like many other crops with African origins, Southern peas crossed the Atlantic with the slave trade and first became established in the Caribbean before moving up into the American South. As a drought-tolerant, heat-loving legume, the Southern pea thrives in the heat and humidity of a WNC summer.

Another pea-plus is that Mexican bean beetles (a notorious bean pest) don’t really have a taste for Southern peas, although sadly this doesn’t apply to deer, who wholeheartedly love them. Cows and pigs are also big fans, although it wasn’t until Southern peas arrived in North America that they received the name cowpeas. It’s unfortunately a term most likely rooted in racism—to denigrate a nutritious West African food crop to a mere fodder crop.

In 1863, Fearing Burr published a 667-page compendium titled Field and Garden Vegetables of America. It’s a very comprehensive book which completely omits Southern peas. Be sure to not make Fearing Burr’s mistake and skip over the splendid Southern pea. ◊◊