Almost anything can be a pickle. That’s the tasty philosophy of Don Paleno, co-owner of Asheville-based DJ’s Pickles. Though he’s long been an aficionado of brined fruits and vegetables, this entrepreneur and chef stumbled by chance into the world of pickles. Thanks to fervent customer demand, what began as merely one ingredient on a food truck menu has quickly become the centerpiece of a thriving business all its own.

Pickles start with fresh produce, of course. And Paleno—whose business operates at a WNC Farmers Market retail marketshop—always starts his search for produce by looking at what’s available across the market and at local farms. That’s how he connected with Weaverville’s R Farm and one of its owners, Hannah Jeske.

After graduating from UNCA with a degree in environmental science, Jeske took a part-time job in 2013 at R Farm. Six years later, she and partner Quail Romano bought the business from its original owner. The farm produces a wide variety of vegetables, including (but not limited to) cucumbers, carrots, jalapeño peppers, potatoes, daikon and squash. R Farm sells specialty produce to Paleno. “We work with buyers to accommodate what they would like to use,” Jeske says. 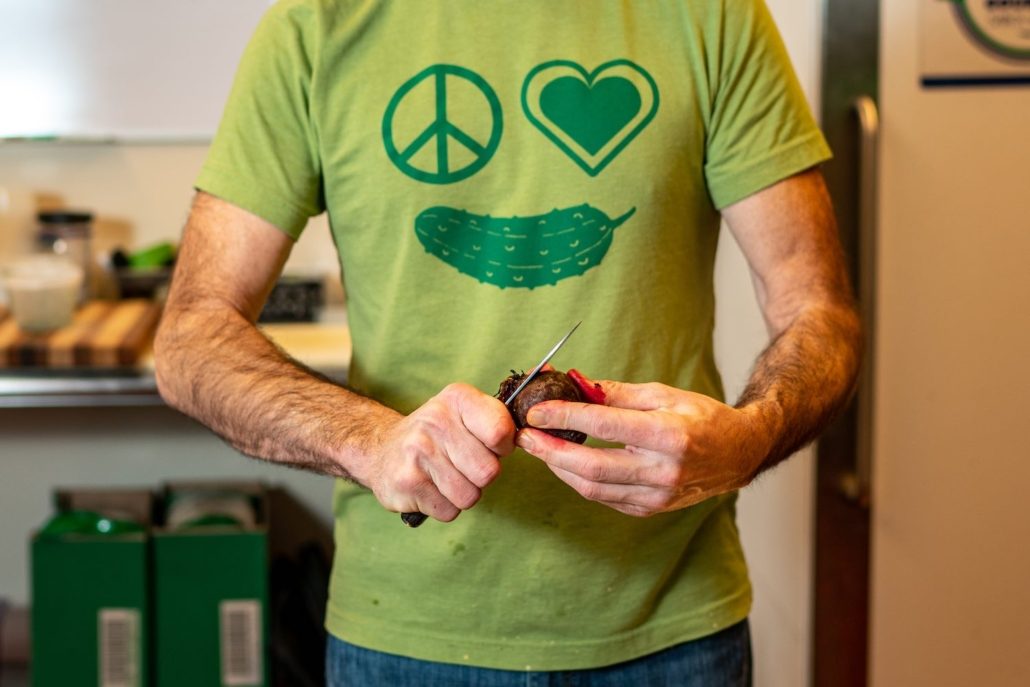 The idea for DJ’s Pickles has its roots in 2018 when Paleno opened a food truck. “I started making pickle chips just to garnish the sandwiches,” Paleno explains. And those pickles were an unexpected hit. “I was only putting two or three next to the sandwich, and people would come back to the truck: ‘Hey man, let me get some more of those pickles!’”

So Paleno added pickles as a side item. Before long, he found that he was making more pickles than sandwiches. Unfortunately, he wasn’t making much money. Paleno next took a job as chef de cuisine at a substance abuse recovery facility. But he continued to get requests for those pickles. He started making larger and larger batches, giving them away to friends. Paleno would be asked constantly, “Could I get a couple jars the next time you make them?”

Starting a pickle business was the logical next step. With friend and business partner Justin DeWald, he launched DJ’s Pickles in early 2021.

A large stainless steel table dominating the kitchen at DJ’s Pickles is covered with five-gallon buckets filled with the bright green, indescribably wonderfully-scented pickle chips. Freshness is at the core of the DJ’s business model: these pickle chips were brined just yesterday, and they’ll be ready for sale in a few days.

With his location at the WNC Farmers Market, Paleno has quick and easy access to fresh produce from local and regional growers. A cucumber that’s less than aesthetically perfect might not be suitable for retail sale, but it’s ideal for making into DJ’s sliced pickles. Paleno sources his cucumbers from a variety of farmers, often working through Mountain Food Products and their wholesale location on the market. “In the summertime,” Paleno says, “I go down to the truck sheds here at the market and buy straight off the back of the trucks.”

And it’s not uncommon for smaller growers to reach out directly to Paleno. “When they have cucumbers they need to sell, it’s ‘Hey, call the pickle guy.’”

But DJ’s Pickles is about much more than cucumbers, and that’s where growers like R Farm come in. “They had an abundance of jalapeños,” Paleno recalls. “They were looking to sell them at a discount.” The farm has a 240-foot plant bed for its jalapeños, and a typical harvest runs about 1700 pounds. “Don bought somewhere between 50 and 100 pounds,” Jeske says. 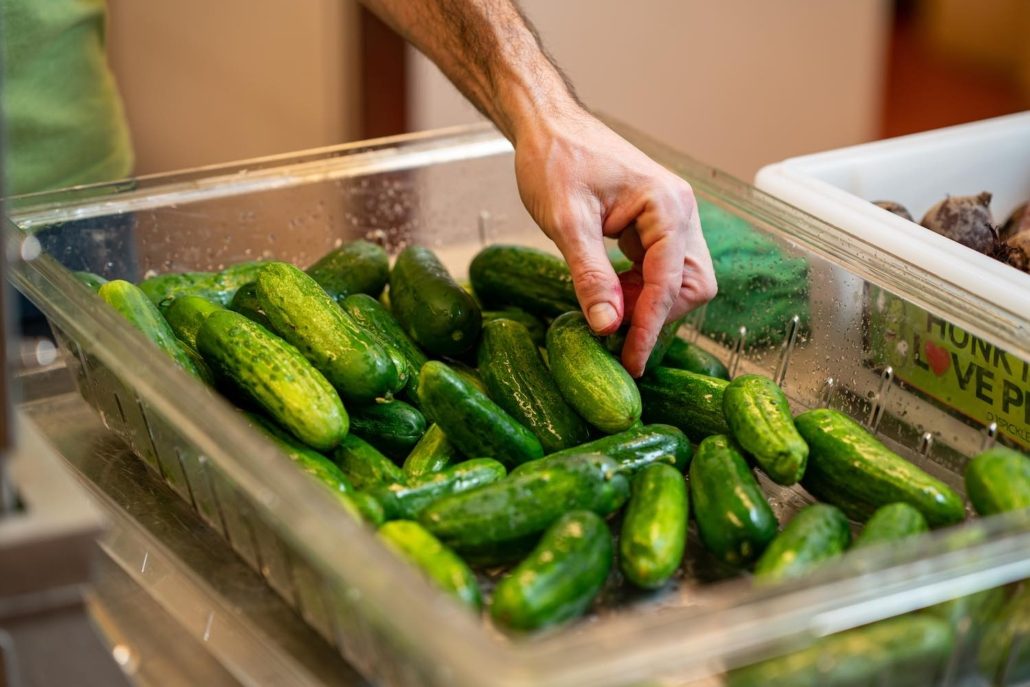 At the same time, knowing of Paleno’s creative and adventurous nature, Jeske had something else she thought might interest the pickle guy. “Here,” she said. “Try these.” Paleno took a bite of a small, whitish item he’d been handed, but he didn’t know what it was. “These are bamboo shoots,” Jeske told him. Paleno says he was blown away. “I had never had fresh bamboo shoots; I’d always had the ones out of a can that are thrown into a stir fry.”

Those fresh, tender bamboo shoots were nothing like the fibrous, tongue-depressor-like planks packed in water-filled cans. “Bamboo shoots aren’t the easiest to market,” Jeske admits with a chuckle. “A lot of people don’t know what to do with them.” But Paleno knew. He’d do the same thing he does with beets, carrots, green beans, watermelon, jalapeños, even apple slices: he’d pickle them.

Bamboo shoots are a renewable harvest. “It’s more about management,” Jeske says. “They just naturally come up every year.” If the shoots aren’t harvested, they quickly grow into the long, slender trunks that resemble a fishing pole. “And they can quickly become too crowded in the forest.”

R Farm’s original owner John Roland planted the bamboo back in the 1980s to help with erosion control around a creek that runs through the farm. But left to its own devices, that stand of bamboo would creep into the farm fields, choking out the produce. So Jeske and Romano harvest the shoots; Jeske says that a typical yield runs about 500 pounds or more. R Farm offered DJ’s Pickles a 10-pound case of the tender shoots; Paleno bought that, and in short order, he enthusiastically returned for a second one.

Every one of DJ’s Pickles’ recipes is unique. Beets get a brine that includes balsamic vinegar, and apple slices are often pickled in cider vinegar. In the case of the bamboo shoots, Paleno brines them in rice vinegar, adding ginger (“heavy on the ginger,” he emphasizes) sugar, salt, garlic and crushed red pepper. The result is sweet and spicy, with a distinctive Asian character. They’re crisper than pickled cucumbers, but neither look nor taste anything like the mass-produced, canned bamboo shoots found in retail groceries.

Because of a business model that relies as much as possible on locally sourced produce, many of the pickle varieties on the company’s product list come and go with the seasons. “In January of our first year in business, we couldn’t get any pickle cucumbers,” Paleno admits. But when supplies dwindle, so too can demand, perhaps fortunately. Customers aren’t exactly clamoring for pickles—a staple of summer cookouts—in the winter months. “But other things go up,” he says. “We’ll pickle beets, radishes, green beans, turnips.”

He and his small staff stay busy year-round at local tailgate markets, tending to the retail side of the business and working in the kitchen. Paleno’s new retail location at the market, where he offers free samples to customers, offers improved access and visibility, plus more room to work on creating pickled delicacies. Some of the harder vegetables (like turnips and beets) get a brief dip in the cooking pot before pickling, but as Paleno explains, “when we quick pickle, we boil our brine and pour it over the top of raw vegetables.”

While DJ’s Pickles’ new retail location at the market had a soft opening a few months ago, the company celebrated with a formal ribbon-cutting ceremony in November to coincide with National Pickle Day. The new space features a kitchen and retail space. And its pickle-centric lunch counter brings things back full circle to Paleno’s food truck days. A growing line of pickle-oriented merchandise is offered both at DJ’s retail storefront and via the company’s website.

And the pickle guy’s passion for his work finds regular validation in happy customers. “I just love watching people try our products,” Paleno says. “Their faces give off several different expressions, and they’re like, ‘Oh! I wasn’t ready for that!”

Author of two books and contributor to magazines and alt-weeklies in the U.S. and UK, Bill Kopp writes about arts, lifestyle, music and pop culture. He enjoys meeting (and writing profiles of) anyone who’s passionate about what they do. 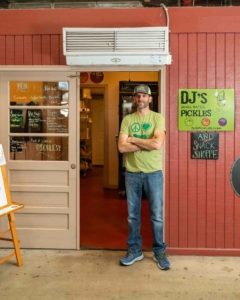