By C.A. Carlson/Photos by Erin Adams

Imagine your favorite meal. Maybe it’s a beautifully composed plate from one of Asheville’s farm-to-table restaurants, with  tender spring vegetables and a few edible flowers.  Maybe it’s a summer supper with squash from your own garden and a homemade apple pie. It could be just a good old-fashioned burger with lettuce and tomato and onion and fries on the side.

That’s how much of our food supply  depends upon pollinators, according to Bee City USA. The Asheville-based  organization is driving a nationwide effort  to engage communities in protecting wildlife  populations—from the familiar European  honeybee to native insects, birds, bats, and more— that help plants to reproduce. Many of these species  are endangered or under threat from a wide range of factors, including pesticides, habitat destruction, parasites, and climate change.

“Pollinator health is an immediate, urgent issue,” says Phyllis Stiles, a former beekeeper and founder of Bee City USA. “But we can all make choices and do things in our very own backyards to help.” Thanks to Bee City and other organizations, Asheville is at the center of a movement to assist beekeepers and the public in making those choices and helping pollinators to thrive.

To understand why pollinators matter, it’s important first to understand how  pollination works. Much of the food we eat comes from flowering plants, and for a flower  to turn into, say, a blueberry or an almond, pollen must be transferred from a plant’s male  part, known as an anther, to a female part, the stigma. Sometimes that transfer happens between different plants of the same species in the process known as cross-pollination, while other plants self-pollinate. Some plants, like grains, rely upon the wind to carry their pollen, but more than 80 percent of flowering species have evolved alongside animals that transfer pollen within and among plants as they forage for food.

The honeybee, which was brought to North America by European settlers in the 1600s, “gets a lot of the press, but they’re divas when it comes down to pollination,” says Ben Mackie, garden manager at Warren Wilson College in Swannanoa. The private liberal arts institution is known for its commitment to sustainable agriculture, with fields, livestock, and gardens tended by students. Mackie leads both the garden crew and a tight team of students with a commitment to beekeeping. They maintain the college’s hives and conduct research, outreach, and education. While honeybees like those at Warren Wilson are responsible for pollinating 80 percent of farmed crops in the U.S., they also have serious limitations.

“They don’t like to go out when it’s drizzly or when it’s below 60 degrees. If it’s too hot, they don’t like to fly. So native pollinators do a lot of the heavy lifting,” says Mackie. He points to the squash bee as an example of a native species that co-evolved as an efficient partner to a specific plant. Squash bees don’t live in colonies; instead, they’re solitary creatures that burrow in the soil near squash plants, and they get nectar—the sugary substance that draws all kinds of pollinators to flowers and that honeybees turn into honey as food for their hives—from squash blossoms. There are about 500 native bee species in North Carolina alone, says Mackie, from those that specialize in blueberries to ones that feast mainly on okra flowers. Other animals have also evolved in ways that support pollination, such as hummingbirds whose long tongues are well suited to certain blossoms.

Honeybees have tended to get the most attention because we enjoy honey, the by-product of pollination. And in recent years, they’ve made the headlines for reasons far less sweet. In the mid-2000s, beekeepers began reporting an alarming phenomenon: worker bees abandoning their hives and their queens, without a trace and without an explanation. Over the next decade or so, nearly 10 million hives were lost to what came to be known as Colony Collapse Disorder (CCD). For a time, the term was used broadly in reference to declining bee populations, but today its definition is more limited, referring to cases when the causes for a colony’s disappearance or death is unknown.

Thanks to research sparked by the CCD crisis, scientists and beekeepers are addressing specific threats to honeybees—and to other pollinators, too. “We’re absolutely confident that the loss of bees results from a combination of factors,” says Stiles. “And that there’s no single silver bullet.” Much attention has been paid to the Varroa mite, which first emerged in Asia in the 1960s and landed in the U.S. in 1987. The parasite sucks fat stores from the bodies of honeybees and carries diseases to which the weakened bees easily fall prey.

The health of honeybees has also been affected by their use in the pollination of monocrops, large-scale plantings that have taken over native habitats and therefore reduced populations of native pollinators. More than 60 percent of the nation’s commercial beehives are shipped to corporate farms to pollinate on a grand scale. Bees may travel from as far away as Georgia to ensure the success of almond crops in California, for example, but the stress of shipment, the limited nutrition from collecting only one kind of nectar, and the likelihood of disease spreading among hives can weaken a colony.

Stiles also points to the destruction of habitats by real estate development and to climate change as strains on all pollinator populations. “The most obvious impact of climate change is that plants are blooming at different times now, not when emerging pollinators need them, but there is also groundbreaking research showing that pollen and nectar are becoming less nutritious,” says Stiles. “That means pollinators have to collect even more for the same nutritional value they used to get years ago.” The relationship between pollinators and climate change may work both ways: if pollinators suffer, so do the plants that depend upon them, including tree species that contribute oxygen to the atmosphere, and the result could be a decrease in biodiversity and an acceleration in the rate of climate change. 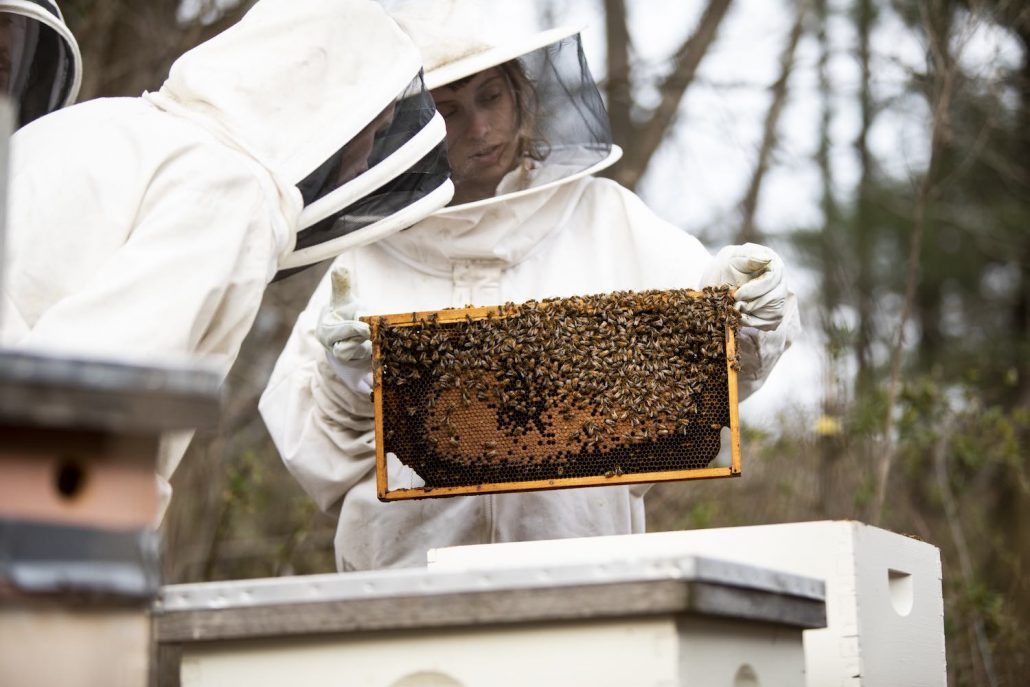 For the last eight years, the nonprofit Center for Honeybee Research in Asheville has been tracking the health of their hives in the only longitudinal study of its kind, according to Terri Lechner, the center’s director for community outreach and fundraising. “Right now, honeybee colonies are dying at more than twice the historical average, and we’re working to find out why,” she says. The center was created by beekeeper Carl Chesick, who was frustrated at the slow progress made by universities and the research establishment.

The group has focused its attention on the Varroa mite. Half of the center’s hives are treated for the pest; half are left untreated as a control. The volunteer researchers also track climate conditions alongside measures of hive health like number of new queens generated and stores of pollen, nectar, and honey. While Lechner is cautious about making sweeping conclusions, the center aims to make all of its results available in the next year through a free online database, updated in real time,  that will help beekeepers to determine best practices for keeping their hives alive.

The center depends upon fundraising to support its research, and its annual Black Jar Honey Tasting Contest is its biggest event. Held each June, the contest welcomes entries from around the world, and past judges have included celebrated Asheville chef Katie Button. Tickets are available to the public, and it’s held at the Renaissance Hotel, whose support for the center includes hosting two hives on the building’s roof, visible to guests; the hotel even recently redecorated some of its public areas with a honeycomb theme.

Right around the same time that the Center for Honeybee Research was taking shape, Phyllis Stiles was attending meetings of the Buncombe County Beekeepers Club and sharing in the group’s worry about CCD. “It was just too depressing,” she recalls. “I thought, ‘We can’t just stand here and watch the bees disappear! There’s got to be something that can be done.’” Stiles turned to the model created by Tree City USA, an initiative that has been encouraging communities to plant more trees since 1976. By 2012, Stiles had established Bee City USA, and the Asheville City Council had voted to adopt the organization’s guidelines and become the nation’s first Bee City.

Today, nearly 80 communities have become Bee Cities, and almost 70 colleges have stepped up as Bee Campuses (Warren Wilson and University of North Carolina Asheville are among them). The certification process includes developing a pollinator habitat plan, with a commitment to native plant species; pursuing pest management strategies that are pollinator-friendly; and conducting public outreach and education.

In Asheville, that mandate takes the form of the annual Pollination Celebration. Every June, Bee City USA and the nonprofit Asheville GreenWorks team up to host lots of events. In 2019, most will take place from June 9 to June 23, with activities for all ages. This year’s schedule is still taking shape, but past offerings have included a Pollinator Safari at Reems Creek Nursery in Weaverville; a tour of the pollinator-friendly plantings on the grounds of New Belgium Brewery; an opportunity to build a bee hotel, suitable for native species, at the West Asheville library; as well as movie screenings, plant sales, and book talks.

Turnout for the Pollination Celebration is terrific, according to GreenWorks executive director Dawn Chávez, and it’s staffed by an enthusiastic Swarm of Pollenteers, who kick things off a few weeks before the event by putting up decals in downtown restaurants that want to show their support. “People are really wild about pollinators in the Asheville area,” Chávez says. “I’ve seen a real desire in this community not only to celebrate, but to learn and act. Everyone wants to know what they can do to protect pollinators.”

GreenWorks continues the education year-round by installing pollinator gardens at local schools; Asheville’s Claxton Elementary even has a beehive which can be viewed from its library, with a tube leading to its pollinator garden. Both UNCA and the North Carolina Arboretum offer their own examples of pollinator gardens, and beecityusa.org has lists of native plants for those who want to plant pollinator gardens at home. There are many other ways that individuals can help to keep pollinators healthy.

The first and most important step, according to Stiles, is developing awareness—and gratitude. “When you’re eating a blueberry, thank a blueberry bee,” she says. “When you’re eating chocolate, thank a midge fly, which pollinates cacao plants. We’ve been spoiled by all the food we have available to us, and it’s important to remember that it depends on pollinators.” ◊◊ 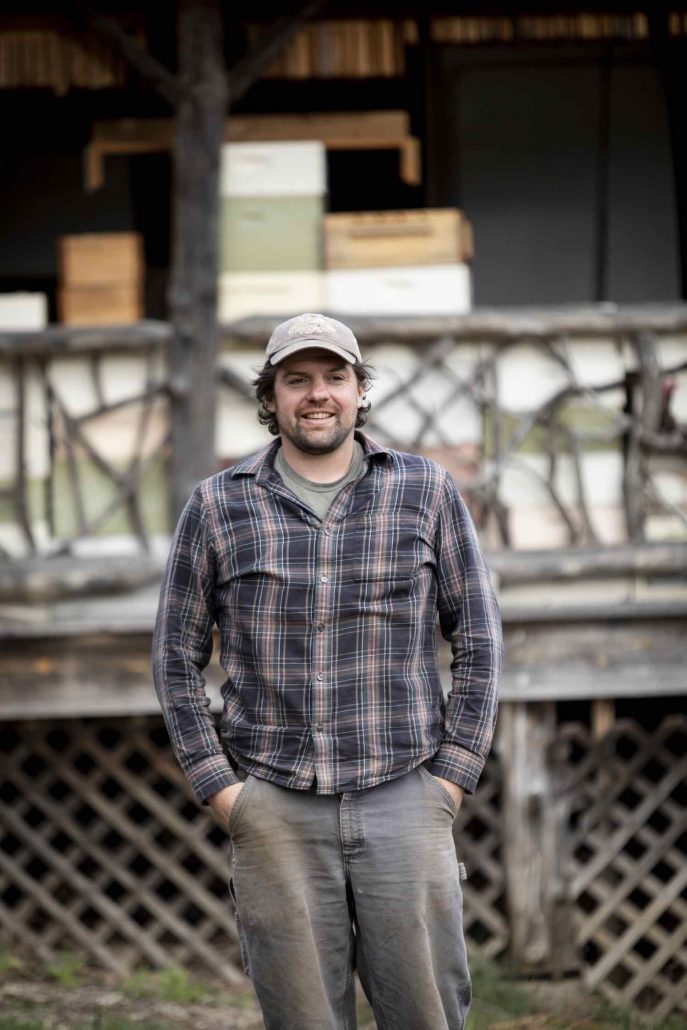 The Wide World of Winter Squash

Celebrating The Sweetness of Sourwood
Scroll to top