PEARLS IN THE KITCHEN

Turning a farmed fungus into a culinary delight

Oyster mushrooms don’t come from the sea as the name may suggest. They earned their moniker because of their pearly appearance and, some say, a flavor that echoes that of the bivalve. They’re one of the most versatile mushrooms around, and they’re easy to cultivate and beneficial to the body as a whole. You’ll find them in supermarkets and farmers markets, and people get downright starry-eyed about these delicate, edible fungi.

Mushroom Farmer on a Mission

Steve Rice, a local farmer tucked away in the hills of Madison County near Marshall, can often be found harvesting oyster mushrooms (part of the Pleurotus genus) from his hoop house on his 90-acre farm. It appears he was born doing this, but it’s not till you talk with him for a spell that you’ll learn there’s a pretty cool story behind it all.

Having grown up on a tobacco farm, farming was not new to him, but eating mushrooms was. While serving in the Special Forces during the Vietnam War, his unit was based in the mountains, and it was there that he first learned mushrooms were a viable food source with a multitude of benefits.

After the war, Rice did some traveling, got into boat-building for a time, sailed to Tahiti, and dabbled in part-time farming. While living in Washington state for a stint, he was surrounded by mushrooms. It seemed they were his destiny.

“At the time, I had no idea that one day I’d be cultivating them,” he says.

Once his wanderlust was satisfied, he returned to his roots, started a family, and became a paramedic, but he continued to farm part-time. His PTSD from Vietnam was exacerbated from 25 years of being an EMT, so when the opportunity to buy a farm came along, he took it.

“I started growing shiitake mushrooms about 20 years ago, and when North Carolina A&T State University began giving out spawn to encourage farmers to try a new crop because tobacco was getting less prosperous, I was the first to get it,” he says. “At one point, I had a thousand shiitake logs, and for several years, I sold 25 pounds per week at the French Broad Food Co-Op. The problem with shiitake logs is that they don’t allow for year-round production.”

So, he turned to the indoors and to oyster mushrooms. They grow vigorously and will survive a wide range of temperatures. They’re generally thought to be one of the easiest types of home-grown mushrooms. Spawn is created when a medium like sterilized grain is inoculated with mycelium, the vegetative part of a fungus. That’s used to seed logs or blocks of straw or sawdust on which the mushrooms grow.

“Oysters are much more consistent [than shiitakes], and you know how many you’ll get. Inoculation to picking takes two to three weeks, and in the last month, I’ve picked about 40 to 50 pounds total,” he says.

Oyster mushrooms offer a great return on investment for Rice: they cost about $1 a pound to grow, and once the crop is ready, it takes about an hour to pick 10 pounds. Rice sells them for up to $16 per pound, mostly to Zuma Coffee in Marshall and local friends, and at the Blannahassett Island farmers market in down-town Marshall (of which he is the founder).

Rice didn’t have a lot of money to invest in his oyster mushroom production operation, so he applied for and received a small $5,000 grant from North Carolina State Extension to build what he calls his “mushroom machine.” It consists of a small greenhouse, shipping containers, and an alternative energy heating and cooling system. He carved out an area in the hillside to bury the containers and to capitalize on the earth’s temperature a few feet below (a consistent 55° to 60°). Each container has perforated pipe that supplies water to the mushrooms, and then it’s surrounded by layers of gravel, plastic, and dirt. The air flows through the pipes into the containers. His exterior hoop house just adds a layer of temperature control for the colder months.

“I eat them almost every day,” Rice says. “When I asked my friend Susi Gott Séguret to experiment with them, she made a dish that was the best I’ve ever eaten. It tasted just like pork, but better and healthier.”

Séguret, who is the founder of the Seasonal School of Culinary Arts, as well as an author, educator, and food activist, was born and raised in Madison County and comes from a farming family, too.

“We grew everything we ate, including the animals for meat, cows for milk, and bees for honey,” says Séguret. “We lived on $200 a year and went to town twice a year. So I knew what good produce tasted like, and I knew how to grow it.”

She left Madison County to travel abroad and lived in the wheatbelt of France for 20 years. That’s where she first learned how to make ingredients sing.

“I bathed in culinary discoveries,” she says. “I had tasted oyster mushrooms before I had the chance to experiment with them. They were mixed in with other varieties of wild mushrooms, and it was hard to distinguish their taste and texture from the ensemble.”

When Séguret was first presented with a batch to transform into a dish, she recalled what one of her French neighbors did with the parasol mushroom (Macrolepiota procera) that they had gathered in the fôret d’Orléans; she decided to give it a try with the oyster. She calls the preparation “Oyster Scallops, or Escalope de Pleurottes, as the French would say. This is the same treatment you’d give veal if making Wienerschnitzel.”

She first removes the stems and sets them aside for another use, and then she dips the body of the mushroom in beaten egg and rolls it in a mixture of flour, cornmeal, salt, pepper, and cayenne. She heats some butter or oil in a skillet and sautés on each side until crisped. Séguret suggests serving the mushrooms whole as a main dish or cutting them in wedges for an appetizer. A little squeeze of lemon gives it an extra zing.

The very first time she tried that method in France, “the result was splendid, even better than with the parasol, because the texture yielded a meaty quality,” Séguret says. When Rice, a long-time family friend, first started developing his clientele for oysters, he contacted her for recipe development ideas, and he frequently contributed examples of his harvest to further the discovery of this ingredient in a world where the button mushroom still reigns.

“I’ve only had a handful of chances to really experiment, but the imagination runs wild. I’ve just finished writing a book on cooking with truffles, and oyster mushrooms can be substituted for these delicacies when a truffle budget is not available,” she says.

Séguret likes their texture, which she says is much firmer than most mushrooms and stands up to multiple treatments. She adds, “Although I’m a meat-lover, I can definitely see a market here for vegetarians and vegans, as the texture closely resembles that of veal or chicken.”

Oyster mushrooms need to be refrigerated and eaten within a week or dried. To date, Séguret has only used them freshly harvested, but she can envision cooking them slightly in butter and freezing them for later use in sauces and stews.

You’ll often find these pearls of fungus on the menu during one of Séguret’s “Appalachian Culinary Experiences,” year-round culinary foraging dinners held in Marshall. More information on these culinary experiences can be found at appalachianculinary.com.

If you develop a taste for Pleurotus ostreatus, Rice encourages you to grow your own. Amateurs can easily replicate his approach to growing the fungi on their porches or in their basements or garages. He says, “My system is really cheap and easy for farmers or people who just want to eat oyster mushrooms regularly.” ◊◊

Liisa Andreassen is a freelance writer who lives in Asheville. She writes on numerous topics for multiple industries, but has a strong focus on food, hospitality and travel. She’s also the co-founder of Cottage Cooking, where she and her husband give dinner-party style cooking classes out of their North Asheville home. cottagecookingasheville.com. 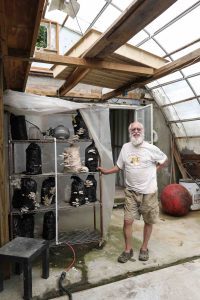 Steve Rice, a local farmer, can often be found harvesting oyster mushrooms from a hoop house on his 90-acre farm in Madison County. 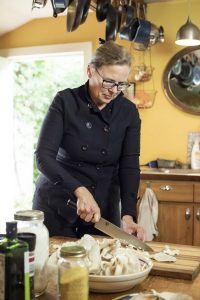 Susi Gott Séguret, founder of the Seasonal School of Culinary Arts, serves oyster mushrooms as an appetizer or main dish.