From compliments to pork, small gestures have far-reaching effects

I used to have considerably more free time on my hands. Back in the early 2000s—before becoming a mother to two children, leaving my 9-to-5 job to embark on that unpredictable journey known as self-employment, and taking on the mantle of managing a homestead were even remote possibilities—my days, hours, and minutes weren’t nearly as fully consumed with every manner of minutiae as they are today. In those freewheeling, open-scheduled days of yore, one of my most beloved gifts to myself was to head to a nearby bookstore, grab a stack of magazines (cooking, gardening, and home décor were, and remain, my reads of choice), order a caffeinated beverage, and cozy up at a small corner table to while away the hours.

On one such occasion, while deeply engrossed in reading, the bookstore abuzz with patrons seeking a similar solace, or a least a strong cup of joe, a barista walked up to my table and set down a small plate. On it was a caramel-riddled chocolate confection, a turtle brownie. “A guy bought this for you and asked me to bring it over, saying it was for having, as he put it, ‘The best glasses in the entire place.’” She went on to explain that this anonymous bestower of sugary delights departed after paying for his purchase, and was no longer in the store.

At the time, the eyeglass frames I wore had belonged in a previous lifetime to my great-grandmother, known simply as Mamaw to me. They were black and cat-eye-shaped, with tiny rhinestone filigree detailing the brow portion. I’d had my prescription put in years prior, and I prized them highly. As the barista went back to the counter, I took a minute to reflect on the kindness of this stranger. His anonymity was what impressed me most. If he’d remained on site, I’d have likely been too weirded out to have truly appreciated the gesture. I’ve never been too much for flirting; I was far too shy for such behavior. By leaving the scene, however, he enabled me to silently enjoy his thoughtfulness, before tearing into that brownie and savoring every last crumb.

To this day, nearly 15 years later, I still recall with acute clarity this simple gesture left such an indelible mark on me. That’s the power of small gestures. Their effect can be exponential, gaining invisible, sustaining momentum in the process. I remember feeling deeply buoyed by this random act of kindness. While I can’t recall the particulars, all these years later, I feel quite certain that, influenced by my unexpected compliment and its accompanying brownie, I was, in turn, especially kind and effusive to others I encountered later that day.

All of which brings me to bacon. What could a random compliment and gift from a stranger possibly have to do with bacon, you might wonder? A good deal, I’d argue. Bacon, in my estimation, is the ingredient, much like salt, that has the power to magnify and amplify whatever it is served alongside. Even a small amount considerably enhances a recipe. This is actually true of pork in general. Tuck a ham hock into a simmering pot of collards, and you take the greens from tasty to transcendent. Melt bacon drippings into your cornbread, and things go from ho-hum to “hot damn!” The best minestrone I’ve ever had the pleasure of tasting was served at Lou Malnati’s Pizzeria in Chicago, where pork broth was used as the foundation of the dish. The most flavorful stuffing at Thanksgiving, in my estimation, always, always has breakfast sausage incorporated into it. Pork is the subtle accent that elevates whatever it’s partnered with, the Lucy to the other ingredient’s Desi. The Dolly to the Kenny. The Beyoncé to the Jay-Z.

Essentially, what I’m getting at here in my bacon-and- compliments metaphor is that little things mean a lot. Seemingly small acts can have profound, lasting impacts. A kind word or gesture offered from or received by a stranger can, at the risk of sounding hyperbolic, change the world. Science backs this up. According to an Inc.com article by Wanda Thibodeaux, “Science already has given you two good reasons to smile at other people— the action triggers mirror neurons so that the other person feels your happiness, and researchers know that what you do with your body can affect your mood, for better or worse.”

So, go ahead. Smile at folks whom you pass in the street or who are crowded together with you at the airport gate. Compliment the shirt or shoes worn by the person in front of you in the checkout line. Leave the brownie for the lady at the bookstore whose eye-glasses strike your fancy. Eat the bacon. It all has cumulative, ripple effects you can’t possibly imagine. ◊◊

Ashley English is the author of several books, including Southern from Scratch: Pantry Essentials and Down-Home Recipes and A Year of Picnics: Recipes for Dining Well in the Great Outdoors. She lives in Candler, North Carolina, with her husband, two sons, and a menagerie of chickens, dogs, cats, and bees. Smallmeasure.com 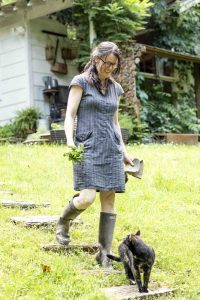 PEARLS IN THE KITCHEN