OUT OF THE KITCHEN, OUT ON THE TOWN

Where do Asheville chefs go when they’re the diners?

Asheville chefs are a busy lot, so when they get the chance to turn the tables and have a seat, they’re pretty selective about where to eat. Here, a few local restaurateurs dish about turn-ons and turn-offs, favorite gastronomic cities to visit, and why they don’t usually rely on reviews.

When given the chance to sample peer creations, how do chefs decide where to dine? Most agree that reviews are not their go-to resource.

“Reviews have to be taken with a grain of salt,” says Sam Etheridge, executive chef and owner of farm-to-table Ambrozia Bar & Bistro in North Asheville. “You don’t know who’s writing them.”

That’s not to say chefs don’t occasionally check out reviews, but when they do, they often look at the overall ranking and see whether or not the lowest are indicative of a larger issue (e.g., uncleanliness) or just unfortunate experiences. They also look for a common thread of positives and negatives.

“We read several reviews and take into consideration a few other details such as ‘Is the restaurant new?’ I’ll give any place three tries before giving up,” says Laura Smith, co-owner and pastry chef at pan-Mediterranean restaurant and wine bar Rezaz in Biltmore Village.

Other resources such as the popular lists from restaurant guide Eater also give chefs an idea of what they’re stepping into, but mostly, industry professionals rely on word of mouth. They want to talk to the people who live and work in the area.

“People like hotel valets and housekeepers often provide the most reliable recommendations because they work hard for their money and only spend it on food they warrant worthy of their dime,” says Jesse Roque, executive chef and owner of tapas spot Never Blue in Hendersonville.

Talking to industry peers and hitting up the local barkeep or other front-of-house staff with questions provide key insights, too.

When eating out, keeping it pretty close to home is more realistic than traveling far and wide for most chefs, who have limited time in their pantry.

Greenville, Atlanta, and Charleston are frequented locales. Roque raves about the popular and award-winning Charleston Grill. She says the chef is a master at melding flavors in the up-scale, European-influenced dishes it serves. The affordable deli Pita House in Greenville also tops her list.

“I love the small menu, handwritten every day, that’s based on whatever local vegetables and proteins are being brought in that day,” Josiah says. They’re also fans of Staplehouse in Atlanta, an American-style restaurant whose profits benefit the charitable organization Giving Kitchen. They also had a great meal recently at Watchman’s, Kimball House’s new seafood-focused restaurant.

Kate and Adam Bannasch have given East Asheville a dining destination in the Copper Crown, whose menu reflects influences from New Orleans to Italy. When they travel, they enjoy checking out other neighborhood joints like Charleston’s FIG, and they’re also big fans of breakfast at Jack’s Cafe and cocktails at Proof.

And when these culinary explorers have a chance to travel further from home, cities such as New York, New Orleans, and Chicago make the cut.

The McGaugheys recently attended the opening of Roister in Chicago and say that it was “exquisite.” Maude’s Liquor Bar is one of their favorites in that city, too—rich, French, and classic.

It’s no surprise that Kate and Adam Bannasch have a soft spot for New Orleans—it’s the city where they met. When they go back, they enjoy visiting old haunts like Liuzza’s by the Track and Verti Marte in the Quarter.

Smith and her husband, Brian, co-owner and executive chef at Rezaz, agree that one of their most memorable dining experiences was during their first trip together to San Sebastian in Spain’s Basque country.

“We’d go from pintxos [a small snack] to pintxos, eating and sipping on any specials offered,” Laura says. “Akelarre in San Sebastian was our first Michelin-star restaurant. It didn’t disappoint.”

Etheridge has a sweet spot for the Big Apple. When there, he tends to favor the Chinese small-plates tradition of dim sum, and Nom Wah Tea Parlor, Hop Shing, and East Harbor are some of his key stops. He also enjoys fine dining establishments like Le Bernardin, Per Se, The Modern, Daniel, and Jean-Georges.

“You can get a whole other level of food and service at these places,” he says.

As with other diners, a warm smile and friendly greeting can go a long way in pleasing chefs who are out on the town. A great server can make all the difference. For example, Smith advises that if the food is poor, a server has a chance to fix the problem.

“A server’s job is take care of the guest—to exceed their expectations. If a person is not forthright with a problem, it can’t be solved. And, if you’re having a terrible, no-good day, a server’s attitude can change your day for the better—I’ve seen it happen,” she says.

Many chefs turn to servers for recommendations, but they’re pretty quick to see through those just out to make a buck.

“If a server only recommends high-ticket items right off the bat, they’re only there for payday, not to give their guest an experience,” Roque says.

Many chefs will also ask servers to help them when stuck between two choices or to ask if there’s a signature dish. A server’s recommendation and explanation of a dish can go a long way. Ask them about their favorites, and then ask why.

Specials can be hit-or-miss. Was the fish just flown in today? Is this a chef creation that really showcases a special talent? If the server sounds excited about the special, it might be worth a go.

Just about every chef agrees that when ordering, it’s important to try new things and get out of your comfort zone. Sharing is a great way to do this. It allows you to sample without really committing. And, really, don’t be afraid to ask questions and to get clarification on terms you don’t understand.

When it’s time to choose a wine, most chefs stick with varietals they like. Often, if they’re wanting to branch out a bit, they’ll turn to server recommendations here, too, and reveal their likes and dislikes.

“Ask for something that may be similar to what you like, but more outside the box so you can experience something new,” McGaughey says.

Kate and Adam Bannasch agree that stepping a little outside your zone is good. For example, regions are usually your best indicator of style—a Sauvignon Blanc from France is going to be very different than one from New Zealand.

“I tend to enjoy Old-World style wines more than New-World styles, so I might choose to drink a varietal that I typically wouldn’t because of where it’s from,” says Kate. “I’ve discovered a number of new favorite wines that way.”

Etheridge advises that you keep an eye out for smaller regions and blends.

“The big names or most familiar grapes are going to be marked up higher because they sell easier,” he says. “You’ll find better value with the more country-style wines from Europe.”

Roque says she’ll skip the wine; she prefers to sip on gin instead. Her top picks are Hat Trick with Fever Tree Elder-flower Tonic and lime; and Death’s Door with tonic, muddled orange, and clove.

Etheridge says his only real restaurant turn-off is chains.

“They have no personality. I avoid them as much as I can,” he says.

McGaughey has no patience for pretension. If he sees that a place has put boatloads of money into styling the joint, but the menu takes a backseat, what’s the point?

“Aesthetics over passion? No thanks,” he says.

If the menu is dirty, it’s a red flag for Smith. She says that presentation is not only important with the food. And if the menu is too wordy and over-embellished, McGaughey thinks twice. Let the ingredients speak for themselves. Keep it simple.

Most chefs also shun crowds. They prefer to dine during the week when they can take their time. It’s also pretty rare that they’ll have a weekend off.

For Roque, Sundays are eat-at-home days.

“Authentic Mexican food is a weekend religion at our house,” she says. ◊◊

Liisa Andreassen is a freelance content writer who lives in Asheville. She writes on numerous topics for multiple industries, but has a strong focus on food, hospitality and travel. (And yes, the spelling of her first name is correct, it’s Finnish). 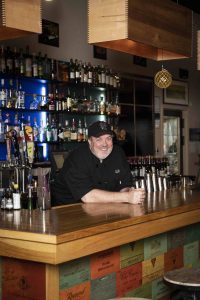 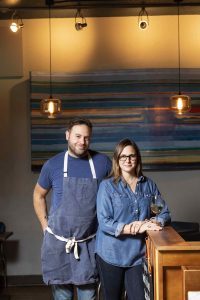