The power and pleasure of collaboration, in the kitchen and in life

I haven’t always been a team player. Which is to say, I’ve been a particularly independent, go-it-alone person for most of my life. To highlight this innate individualism, my mother points to the first time I rode a horse, around age 2. After being set high up on the saddle, I was given a few pointers from the instructor on how to pull the reins to indicate to the horse which direction I wished to go. I then set off alone on a gentle trot in the small corral. After traveling a very short length, so the story goes, I began crying out loudly. Mom ran down the field in a panic, thinking the horse had perhaps bit me. When she caught up and asked what had happened, I exasperatingly exclaimed, through frustrated tears, “I told it to go THIS way, and it went THAT way!” She breathed a sigh of relief, while simultaneously realizing exactly what type of daughter she had on her hands. I wasn’t scared or timid during my inaugural tender-age experience unassisted on a horse. To the contrary, I was apparently all set to ride off into the sunset, on my own, if only my steed would have proven trustier.

For years thereafter, I made decisions and took actions based entirely on my own inclinations and leanings. It’s not that I didn’t listen to the opinions and advice of family or friends; it’s more that I didn’t naturally tend to solicit them. It wasn’t my first tendency to seek counsel when confronted with a dilemma. I’d ruminate and mull over predicaments, or problems, or quandaries on my own, only moving forward with a decision when I felt I’d come to the best possible conclusion on a given issue. I was great at helping loved ones work through concerns in their own lives. I just tended to keep my own proverbial cards close to my chest, revealing little about what troubled my heart or challenged my days with others.

You can imagine, then, just how well this approach of mine towards solitary decision-making played out when I married my husband Glenn, a consummate team player if there ever was one, in June 2007. His natural orientation towards collaboration was about as different from mine as they come. Whether minor (“Should I get these new boots?”) or major, he consults with me about nearly every possible decision he is presented with. He loves feedback, and consensus- building, and arriving at a final resolution after talking it all out. I had much to learn.

What I’ve come to appreciate over these 12 years of married life is the power of “we,” as opposed to “me.” While there’s nothing inherently wrong with carving out a life alone, making decisions and taking action with oneself front and center, there is a deep beauty to be discovered in working in full symbiosis and partnership with others. Our interdependence can be our strength, as we’re often stronger together. Much like a dog chasing its tail, convinced a just-out-of-reach foe is out to get them, we often fail to see our own shortcomings, or hang-ups, or simply things we might not have considered without the insights provided by another perspective or vantage point.

Across the natural world, the inherent magic of interdependence is on constant, quiet display. Trees and plants take in energy emitted from the sun, couple it with carbon dioxide given off by humans and other animals, and give off oxygen in return into the atmosphere, which we then use to live. This extremely complex, inherently beautiful loop, known as photosynthesis, is one wherein everyone and everything reaps profound, life-sustaining rewards. The same scenario exists with pollination, wherein plants and pollinating creatures engage in a gorgeous dance benefitting not just both organisms involved, but myriad other life forms, including humans.

We don’t judge or criticize this type of dependence when we examine it in the creatures we cohabitate with, but we’re quick to devalue it when witnessed in our own species. Inspired by the tireless efforts of pollinators, and the gospel of interdependence they silently proselytize, I’m offering recipes for Sheet Pan Drumsticks with Carrots, Asparagus, and Tarragon and Swedish Crèmes with Roasted Strawberries and Cardamom. The main ingredients contained in both recipes are crops heavily dependent on the efforts of pollinators.

My married life has helped me come to deeply appreciate the power of collective decision-making. I now see the value in acting in concert and connection with others. I’ve realized that life can be made much more rich, much more vibrant, and much more abundant with choices when we solicit, enlist, and make ourselves open to the inputs of others. We don’t have to go it alone, all of the time. Much like the pollinators and plants we share this planet with, we all have something within us that aids and assists the world around us. While my mom might have given birth to an independently- inclined child, she’s now the parent of an interdependence-appreciating woman. ◊◊

Ashley English is the author of several books, including Southern from Scratch: Pantry Essentials and Down-Home Recipes and A Year of Picnics: Recipes for Dining Well in the Great Outdoors. She lives in Candler, North Carolina, with her husband, two sons, and a menagerie of chickens, dogs, cats, and bees. Smallmeasure.com 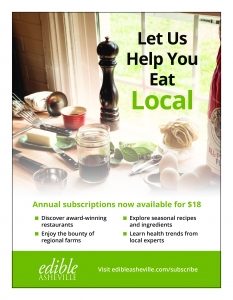 OUT OF THE KITCHEN, OUT ON THE TOWN
Scroll to top