How To Sip With Style

An insider’s guide to tasting beer

Asheville is a mecca for beer lovers. While the city has long poured local IPAs and porters, we now have crisp pilsners, sour ales, barrel-aged stouts, and salty Gose drawing visitors from around the world.

Yet as a local, there’s just as much to explore. While the number of beers to choose from may seem overwhelming, don’t be discouraged. The easiest way to demystify beer is also the most fun: taste it!

Whether you’re ushering out-of-town family members through their first brewery experience or want to take your own palate to the next level, there are plenty of benefits to exploring new styles.

So how do you go about tasting a beer? First, before we unscrew the growler cap, there’s a very important step: set your expectations.

Let’s say your friend poured you a glass of Wicked Weed Brewing Company’s Red Angel and told you, “Hey, try this beer. It’s really good!” Chances are you’d take a sip and get hit with a sour surprise.

But if your friend told you Red Angel is a sour beer aged in wine barrels with raspberries, your expectations are totally different. Now when you take a sip, you’re thinking about wine and raspberries as much as beer. The sour character of the beer will no longer be a shock.

When out and about, the easiest way to put beers in this sort of context—and to figure out what you might like or not like—is by learning more about beer styles.

Let’s look at imperial IPA and Russian imperial stout as an example. These two styles are the favorites of beer nerds the world over. On their face, they seem very different. IPA is known as a hoppy style, with high bitterness and aroma from the hops. Grape fruit might be the first thing you smell. Stout, on the other hand, is known as a malty style: it’s all about the roast.

When you know more about beer styles, though, you can start to see the similarities between imperial IPA and Russian imperial stout.

First, the name provides a clue: imperial means strong. So both these beers are larger versions of their base styles, and the alcohol content will be higher in both. Arguably a fun feature on its own, this is important for another reason. Higher alcohol means the beers can showcase more of what they’re known for, whether that’s more malt or more hops. So we’re talking big flavor!

There’s another key similarity. Both beers pack a bitterness level near the top of the spectrum for beer. This is worth noting because bitterness is one of the most polarizing qualities in a beer for new and experienced beer drinkers alike. Most new to craft beer are put off by a high bitterness level while craft beer lovers tend to crave it.

So will you like Wedge Brewing Co.’s Vadim Bora Imperial Stout just because you like Wedge’s Third Rail Imperial IPA? It’s not a sure thing, but it’s worth a try. On the other hand, if you find IPA bitter, it’s probably best to avoid both.

Ready to make the jump from drinking to tasting? Cliff Mori, owner of the local beer tour company BREW-ed, has some tips. He’s an Advanced Cicerone, meaning he’s a certified expert in beer flavors, styles, and service—similar to a wine sommelier, but for beer.

The Cicerone Certification Program® includes an extensive exam that tests topics such as beer styles and culture, best practices for pairing beer with food, and beer tasting and flavors. Mori imparts this knowledge by guiding beer-lovers through tastings at downtown Asheville breweries. (His tours also cover the brewing process and the stories behind the pints.) 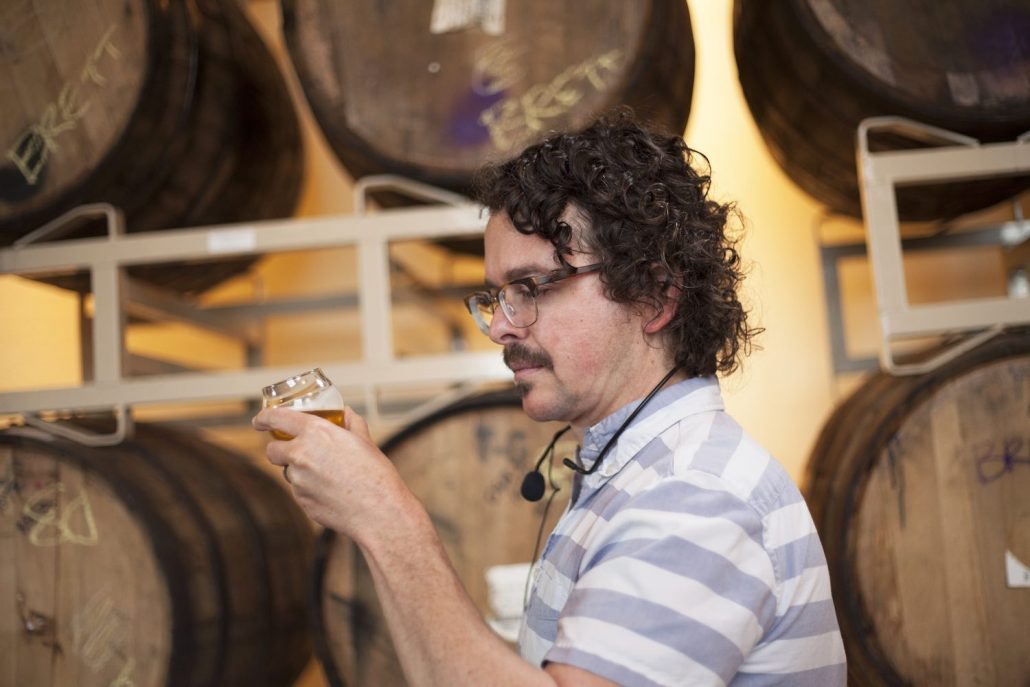 Another tip from Mori is to get familiar with the raw ingredients of beer. “We always sample some different malts and then taste beers that use those malts,” Mori says. “We’ll smell some bright, citrusy American hops and taste an IPA…everyone gets a better idea of how they affect the finished beer.”

His last piece of advice is an easy one to embrace: be more thoughtful when forming opinions of beer. “We live in this world where we consume something and we say ‘It’s good,’ or ‘It’s not good,’ and it stops there,” Mori says. “I like challenging people to go further than that.”

If you’re ready to go further, start by ordering your favorite beer. Now pretend it’s a new dish at your favorite restaurant. Before tasting it, take a moment to notice its appearance. Sure, you sort of glanced at it when the bartender set it down, but now really look. What is the color? Is the beer clear or hazy? Is there still some foam on top or has it all gone away? Just as we eat with our eyes, we drink with our eyes, too.

As you bring the glass to your lips, pause and inhale the aroma before you take a sip. This might be hard at first, but the aroma will change once you taste it. So give it a smell and pick a handful of words you could use to describe the aroma. Maybe it’s “orange, tangerine, and pine,” or maybe it’s “the almond chocolate donut at Vortex.” There are no wrong answers.

Ready for next-level sipping? As you up your tasting game, it’s helpful to delve deep into a particular style. Use this guide to understand pale ales and IPAs at a glance.

Pale Ale (4.5-6% ABV): As the name implies, a pale and somewhat hoppy ale. It’s well-balanced: a little sweet and a little bitter. Enjoyable and refreshing.

India Pale Ale, aka IPA (6-7.5% ABV): Much higher bitterness and more hop aroma (citrus, pine) than a pale ale. Some IPAs around town are more amber in color and malty, and some are lighter and crisper.

Session IPA (3-5% ABV): It’s as if a big, hoppy IPA were dialed down. There’s still lots of that IPA aroma, but less bitterness and body. Session beers, known for their low alcohol content, make for very easy drinking.

Black IPA (6-9% ABV): The dark color is misleading as the beer drinks more like an IPA than a stout. Still, there is a little roast coffee/chocolate hiding behind the hops.

Thom O’Hearn is a book editor whose beer-related titles include Beer Pairing, Homebrew Beyond the Basics, and Experimental Homebrewing. He covered the Asheville beer scene for Mountain Xpress from 2013 to 2015. 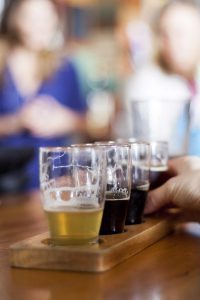 Experts suggest tasting several different beers, and taking note of the differences between them. Photos by Erin Adams.

Brothers In Beer
Scroll to top