Cecilia Marchesini Plates Up a World Tour of Cuisines

Her empanadas are Argentinean, her crepes are French, her tamales are Mexican, but Cecilia Marchesini’s love of cooking carries a different passport. “I’m an Italian mamma who wants to feed everybody,” she said.

The menus of Marchesini’s three Buncombe County food businesses reflect her international story—she grew up in Argentina with an Italian father who encouraged her work in the kitchen, and she married a Frenchman.

But Marchesini’s offerings also respond to the North Carolina community she’s called home since the late 1990s, with local ingredients and plenty of vegan and gluten-free options so that everyone can find a place at her table—or a spot beside her food truck, Ceci’s Culinary Tour. The blue-and-green truck is a first stop for many shoppers as they stroll the North Asheville Tailgate Market each Saturday morning at the University of North Carolina–Asheville.

Marchesini launched the truck in 2010 as a lowoverhead way to get back into the food business (her first Asheville restaurant, Caf. Soleil, had closed in 2005), and it’s helped her build relationships with both customers and farmers she has met through the market. The meat in her beef empanadas (Marchesini’s favorite) comes from Dillingham Family Farm in Barnardsville. She gets produce from Ivy Creek Family Farm and Full Sun Farm and cheese from Spinning Spider Creamery and Three Graces Dairy, all familiar names to market shoppers.

The same suppliers stock the pantry at Cecilia’s Kitchen, the North Asheville commissary where Marchesini serves lunch every day and takeout dinner a few nights a week. “My customers wanted to be able to find me in the winter, when the truck doesn’t go out as much,” Marchesini said. The restaurant, which feels like a mountain cabin perched above Merrimon Avenue, also gives Marchesini the chance to offer dishes beyond the truck’s menu, like the classic Argentinean stew called locro and a ratatouille with sausage that’s a customer favorite, even if it’s not authentically French. “I warn people that I put my own spin on things,” she said.

The menu leans more Gallic at La Guinguette Creperie in Black Mountain, which Marchesini opened in 2014 with the help of her ex-husband, Stephane Diaz. Specials like duck confit and boeuf bourguignon are available along with the crepes, empanadas, and tamales that diners expect at a Marchesini restaurant.

Her customers also expect great local ingredients, and Marchesini makes trade-offs to provide them. As she looks around the dining room at Cecilia’s Kitchen, she points out some orange plastic chairs  donated by a food truck regular who really wanted her to open a restaurant.

“New chairs would cost money, and I want to spend that money on buying the very best chicken,” she said. “What’s more important—the chicken or the chair?”

Crepes : Marchesini’s crepes are authentically gluten-free, made with 100 percent organic buckwheat flour in a northern French style. “They’re called galettes , and they’re the first thing that [Diaz] and I started to make and sell at festivals,” she said. They’re still on all three of her menus, with both savory and sweet fillings. Other desserts are made by Meg Schearer, former West End Bakery pastry chef and now a member of Marchesini’s staff and owner of baking business Whisk AVL.

Empanadas : In some countries, empanadas are made with corn or yuca flour, but Marchesini creates the savory pastries with a flaky wheat dough, reflecting Argentina’s Spanish heritage. They’re meant to be eaten as a portable snack. “When I see someone eating one with a knife and fork, it’s like when an American sees me eating pizza with a knife and fork,” she said. “But the only thing that really matters is whether you enjoy them.”

Tamales : Marchesini gives more guidance to customers who order tamales for the first time. “We tell everyone to take the corn husk off, or they will be chewing forever,” she said. Inside the traditional wrapper, customers will find fillings less spicy than what they may have tasted at Mexican restaurants. “In Argentina, we don’t eat a lot of really spicy food,” Marchesini said, “and I don’t want to hide the flavor of the local meat we’re using.” 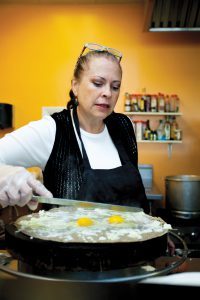 Beer From the Ground Up
Scroll to top