Award-winning chef Steven Goff finds a new home at Jargon in West Asheville, pairing a chef with a reputation for one-of-a-kind dishes with a vibrant, young restaurant that has quickly earned a top spot in Asheville’s competitive culinary scene.

A well-known Latin proverb asserts that “fortune favors the bold” and has been used for centuries to guide a spirit of adventure for scientific research, space exploration, and other forms of derring do that test the limits of human potential.

It could also be said to be the rallying cry of award-winning, local chef Steven Goff, who recently became executive chef at Jargon, a modern American restaurant that sits among the leaders of Asheville’s bustling restaurant scene. Combining a love for classical French cuisine, an admiration for the fresh meats and produce of local farms, and a unique ability to transform marginalized proteins and even offal into fine dining, Goff is embracing the future with his signature boldness.

“I like to do pretty classical dishes, using classical techniques, but with a different presentation,” Goff says.

In 2019, Goff won the prestigious “Chef of the Year”award from the NC Restaurant & Lodging Association—an influential group that represents the state’s $27 billion hospitality industry—with a dish of coffee-braised beef cheeks and smoked beef brain aioli with fermented tabbouleh. Wowing a crowd of 300 with the dish, the judges called it “sexy perfection.”

But the push toward adventure is no less rewarding for the diners who fill the seats at Jargon than for the chefs in the kitchen. While acknowledging that some days are just not a “‘taste new things’ kind of day,” Goff says restaurant goers are “absolutely rewarded” when they experiment with new dishes. “Typically, these are the dishes that chefs have been working on behind the scenes, trying to get right, and so they are jam-packed with love and time,” Goff says. “They are literally our labors of love.” ◊◊ 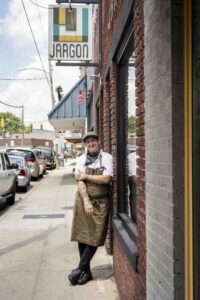 LET US ENTERTAIN YOU