Last spring, Tamarya Sims planted about a dozen rows of medicinal herbs and flowers in the backyard of a West Asheville home. It was a coveted patch of flat and fertile ground next to a small stream and a large white shed that could store gardening tools.

“My goal is to eventually have 60 acres, that’s my dream” Sims tells me. “I’d like to make it an educational farm, especially for kids.”

Sims leases the small patch of land from a couple who own the adjoining home and operates it as Soulfull Simone Farm. The flowers were harvested and offered for sale at an Asheville market; the herbs were plucked, used to make teas and salves for skin conditions, and sold on the Soulfull Simone website. By now, the earthen mounds are ready for winter hibernation and covered in black plastic.

As a Black farmer, Sims is in a unique position. Less than 2% of farmers in the U.S. identify as Black, compared with 14% a century ago, according to the management consulting firm McKinsey & Co. And the farms that are owned and led by Black people tend to be smaller, do fewer sales, and generate smaller profits.

There are several reasons for the decline in Black-owned farms in the U.S., according to McKinsey, including discriminatory lending practices and a historical lack of legal protections that facilitate the generational transfer of property. Even still, farming represents an important opportunity, as the median income for farmers is significantly higher than the median income for all Black Americans. 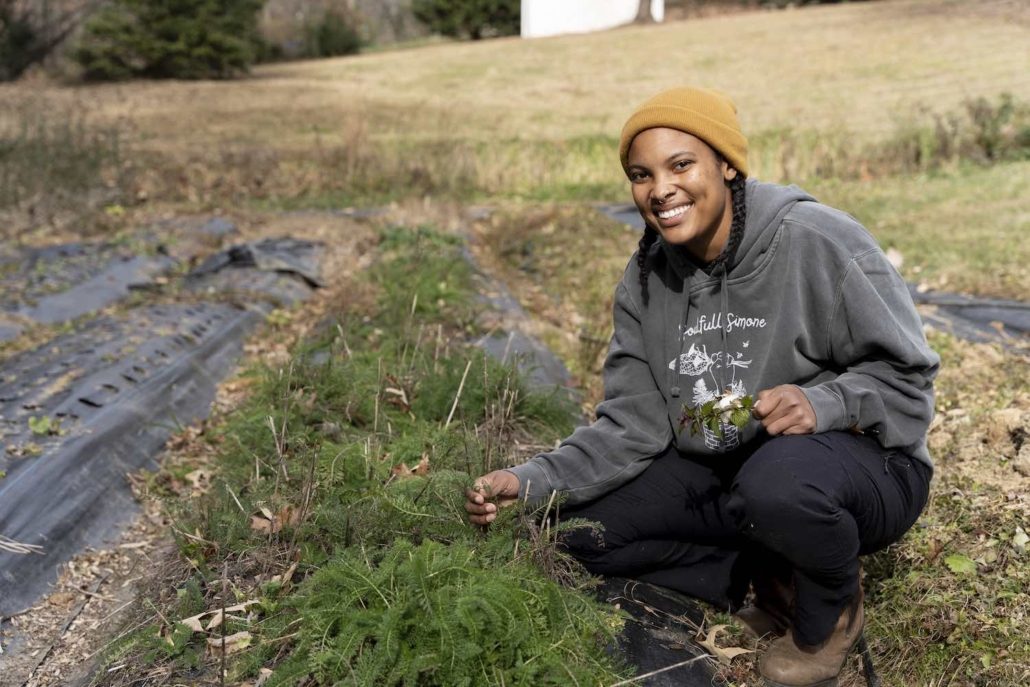 I meet up with Sims on a sunny day with a chilly snap in the air, and we’re sitting on a pair of short metal stools overlooking the garden. Sims (she/ they) has a pair of gardening shears tucked into their hip belt and are wearing a pair of brown boots that have been broken in from years of working in dirt.

Sims is looking to buy a 60-acre patch of land in Western North Carolina and envisions creating a food forest, walking trails, and an education center where kids and young adults can learn about the medicinal power of plants and how they’re grown. Hoping to avoid slipping into debt to purchase the land, Sims set up a GoFundMe page to raise money and has so far collected nearly $45,000.

At just 25, Sims is already emerging as a notable voice in the local movement for environmental sustainability and social justice—two issues that have moved to the forefront of the dialogue about food and farming. “I want to encourage people to be more creative in their thinking about these things,” they say.

Sims will also be one of the speakers at the Organic Growers School’s upcoming Spring Conference, where they’ll be exploring different ways to make food and plant-based medicines more equitable, particularly in Black and Brown communities, where people often experience “food apartheid,” a phrase used to describe not just a lack of access to healthy food, but also the underlying root causes for it.

“I’m going to be teaching this class from my own life experience,” says Sims, telling me that their hometown neighborhood in Conover, about an hour east of Asheville, had far more fast food restaurants and convenience stores than healthy markets. “I think everyone has a right to nutritious food.”

The Asheville-based Organic Growers School is a premier educational hub for organic growing, with a 30-year history of supporting and spreading knowledge among farmers, gardeners and homesteaders. Its annual Spring Conference is a centerpiece of its mission, where the school attracts thousands of attendees from around the region to attend workshops and classes.

Teetering on her stool, Sims looks up at the sky, trying to summarize the theme of her workshop “Equitable Food and Medicine” at the Spring Conference—an undoubtedly powerful platform for Sims and a unique opportunity to motivate an eager audience.

While food insecurity is a clear and pressing need, its causes can be more complex— especially when a legacy of slavery, segregation, and ongoing racism can continue to play an outsized role in the problem.

For Sims, as long as poverty and food insecurity continue to be a problem, they want to motivate people to find ways to help: set up free neighborhood garden stands, help stock community refrigerators, or find ways to support community gardens— particularly Black-owned or Black-led community gardens, like Peace Gardens & Market, Shiloh Community Garden, Southside Community Garden, and Stephens Lee, which can also facilitate direct support of Black farmers. “If you can, just pick one thing, and do that,” Sims says.

Through these efforts, people can improve the lives of their neighbors in low-income communities and communities of color by providing access to not just food, but to fresh and healthy food that will improve their wellbeing.

As a former food policy reporter for a national newspaper, I am very familiar with the efforts to address food insecurity and health in the U.S. But in that role, I often focused on large-scale, multi-billion-dollar policy initiatives led by Congress or state governments. There were efforts to improve the quality of school lunches or the food assistance program known as SNAP, the Supplemental Nutrition Assistance Program. But to listen to Sims is to be inspired by the potential of grassroots efforts to change the way we help each other and seek to achieve fairness and equality in our food system. ◊◊ 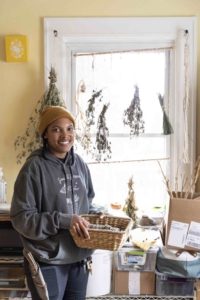