Chickens in the City

Raise a flock without breaking the law or riling up neighbors

Keeping a flock of chickens is remarkably easy and immensely rewarding. Their sweet antics are amusing, their personalities are endearing, and the fresh eggs from a backyard flock are like nothing you’ve ever tasted before. City chicken keepers face challenges that those in the country do not, however, and it takes some effort to create a barnyard-quality life in an urban setting.

When Janet Marrs and Lori Shields moved to Asheville in 2009, they leaned on their childhood farming roots to create a plan for keeping chickens in accordance with city rules. Marrs and Shields initially wanted to keep a flock as farm animals, but urban regulations forced them to contain their hens in a run and changed their plans. They had to take steps to ensure the birds could enjoy the experience of finding their own food and receive plenty of challenging exercise.

“In many respects, I think it has also cemented the pet status of the birds,” says Marrs. “We can’t just open the gate and let them range in a pasture, so we make them treats, take them fresh lettuce and put it in the suet feeders, give them scratch, plant things in their run. Every time, it creates an interaction that would probably not take place if we were raising them on a real farm.”

This is the story of many Asheville flocks. The city animal permit allows a maximum of seven pets per household—including existing pets—meaning no legal city flock is ever larger than seven birds strong. With a flock that size, hens are bound to get treats, chicks are naturally going to be coddled, and most chickens will have a name, securely moving them from “farm animal” to “pet” status within minutes.

“Each [bird] has its own personality, and as a result, I have a different relationship with each one,” says Marrs. The couple’s children, Angel, age 9, and Tristan, age 4, know all of the birds intimately, too. The family has raised their flock in a myriad of ways, from purchasing mail-order hatchery chicks, to buying locally sourced chicks, accepting homeless hens, and hatching chicks under a broody mama hen in their own backyard. 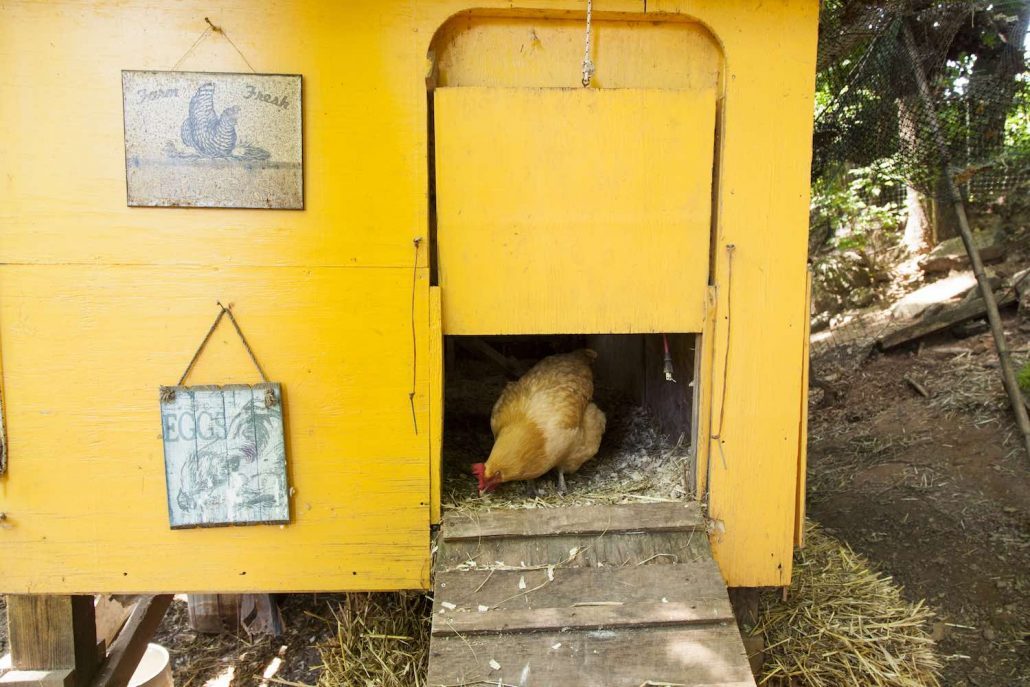 It’s hard to believe that the gentle clucks of so many backyard flocks didn’t exist in Asheville a mere eight years ago. Today, most Ashevillians don’t miss a beat when bringing up their beloved heritage birds, or their neighbor’s tasty green eggs. Chickens are very much a part of Asheville now.

But back in early 2009, before Marrs and Shields got their flock, the city’s existing poultry ordinance required backyard flocks to be a minimum of 100 feet from a neighboring home. Most Asheville city lots are smaller than that, rendering the ordinance inapplicable to most. Meeting those requirements was impossible for many people on a lot no bigger than ⅛ of an acre or 70 feet across.

In 2007, a group of friends collaborated with the goal of changing that ordinance. At the time, Jenny Mercer owned a small flock and wanted to feel more secure in their future. She also wanted others to experience the pleasure and self-reliance of keeping their own chickens. Mercer reached out to Asheville resident and animal rights activist Cathy Williams, and the group set off on changing the city’s regulations.

What they found was a series of outdated laws with an unfounded prejudice against poultry. “The first step was to listen to deeply held objections and develop thoughtful responses based on research and anecdotal evidence,” says Williams. The group heard concerns about unsavory odors, unsanitary conditions, and the cleanliness of potential backyard coops.

The group employed a variety of methods in a pre-social media savvy era. They petitioned at tailgate markets around the countyard in front of local grocery stores. Mercer’s husband, Robbie Sweetzer, coined the phrase “We Still Lay,” and the group created and sold bumper stickers to raise awareness.

They reached out to Josh O’Connor, who was working on his master’s degree with a focus on urban planning at the time. “I used that work to show how bringing food production to the city was something that needed to happen,” O’Connor says. “I also really focused on the idea that when people see food being produced, it helps shift their perspective in ways that help move people toward self-reliance and more healthy eating habits.”

By modeling their approach after successful chicken movements in cities like Madison, Wisconsin, the group brought a proposal to the Asheville City Council. After 18 months of petitioning, proposals, and waiting, the resolution passed in April 2009. The amendment to the existing animal ordinance became effective July 1, and the clucks of backyard chickens soon echoed throughout the city.

If you’re considering starting a flock of your own, there are a few things you’ll want to know. Both city and rural flocks face a common threat: predators. An ongoing study of black bears in Asheville shows absolutely no change in their routes or territories respective of the city. Raccoons, foxes, and hawks also go on about their predator business within the urban environment, but the most likely threat to the Asheville flock is the domestic dog. Dogs account for more chicken losses than many other predators, and city chicken keepers have their fair share to contend with. Preparing a predator-proof coop and staying on top of repairs goes a long way to keeping predators and pests at bay.

Next, there’s the matter of cleanliness. Efforts must be taken to keep any chicken coop clean, but in the city, a smelly coop could be grounds for complaint. And since the city’s monitoring is complaint-driven, it’s wise to keep the coop looking and smelling fresh (as fresh as a chicken coop can be, that is).

Noise is another concern, especially a rooster’s hearty crow. Roosters are not allowed in the City of Asheville, so they shouldn’t be in an urban flock anyway. Hens are fairly quiet, although they may squawk proudly after laying an egg. Neighbors will likely overlook an occasional cluck if fresh eggs are part of the bargain.

Navigating regulations and neighbor relations may require a bit of creativity, but for anyone determined to keep a backyard flock, they’re neither overwhelming nor insurmountable. And the benefits far outweigh the cost of any hoops to jump through.

O’Connor has seen his young children grow up experiencing food sovereignty and sustainable food production as the family’s “normal.” He says that “the reward has been helping to set the foundation for my children’s lives and allowing them to understand what real food is. The whole experience of farm animals teaches empathy and compassion in a way that most people will never have the opportunity to learn.” ◊◊

Kristina Mercedes Urquhart is the author of The Suburban Chicken: The Guide to Keeping Healthy, Thriving Chickens in Your Backyard, and a freelance writer for several publications, including Chickens and Hobby Farm magazines and their websites. She’s a full-time mother to two and homesteader living in Barnardsville, North Carolina. 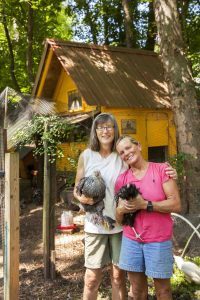 Asheville residents Janet Marrs and Lori Shields have had to comply with city regulations in order to keep chickens at their home.