For the best hamburger, grind it yourself. Asheville’s own Meredith Leigh, author of The Ethical Meat Handbook, tells you how.

The cattle grazing on the mountain pastures of Western North Carolina aren’t there just to look pretty. They’re being raised by the region’s many livestock farmers, who supply us with meat that is sustainability produced and thoroughly delicious.

If you want the best meat, buy local. And if you want the best burger, grind your own. The big national packing houses, after cutting up steaks and roasts, grind up the leftovers and package them for sale as ground beef. This so-called trim comes from many animals, making the origins of the meat hard to trace and raising questions of food safety (especially for those of us who like our burgers rare).

When you buy local meat and grind it in your food processor, those worries disappear. As a bonus, you’ll have better control over texture and flavor. Here’s how.

The best burger contains about 80 percent lean meat and 20 percent fat. Ground sirloin at the supermarket often runs 90/10. When you buy from a butcher shop, or from the meat counter at a good supermarket, you can buy meat and fat separately to create the perfect blend.

Ask your butcher for a half pound of beef fat and two and a half pounds of lean beef—either round or sirloin. That will give you three pounds of ground meat, enough for nine burgers at a third of a pound each.

If you don’t have a place to purchase beef fat separate from lean meat, buy a cut from the chuck, or shoulder, which has a higher fat content and will approximate the 80/20 blend.

*Buy more meat than you need at the moment. Grind all of it, then freeze the extra in one-pound portions.

Slice the meat and fat into pieces that are roughly two inches square. Take a bit of extra time to remove the fascia, the milky-looking connective tissue that may be on the surface of the meat. Slip your knife under the fascia and shave it off , moving your knife in the same direction as the grain of the meat. A bit of fascia in the grind isn’t the end of the world, but since it’s tough you want to avoid it if you can.

Distribute the cubes of meat and fat in an even layer on a sheet pan and slide it into the freezer for 20 minutes. This helps the meat hold its shape and keeps the fat from melting from the heat of friction during the grinding. You can even chill the blade and bowl of your food processor.

Drop the meat into the processor. The bowl should be no more than two-thirds full, so work in batches if you have a small processor or you’re grinding a lot of meat. Pulse the meat until it’s finely chopped. Stop well short of a puree. You won’t get the strands of meat you see in prepackaged trays at the store, because those come from a commercial meat grinder. You’re looking for pea-sized pieces of meat and fat.

Keep the seasonings simple—salt, pepper, maybe chopped onion—but use them in generous amounts. If the mix feels dry or crumbly, you’re probably low on fat. Add an egg yolk or a scoopful of mayonnaise.

Divide the meat into portions of about a third of a pound. Shape the patties with your hands, and keep them loose—a dense pack means a tough burger. Let the buns be your guide: Shape the patties to be slightly larger than the buns, because the meat will shrink on the grill.

You want your grill —charcoal and gas both worth fine—at medium-high heat, hot but not scorching. Place the burgers on the grill and (this is the hard part!) leave them alone. Resist the urge to press with a spatula (you want to keep the fat and moisture inside), and try not to flip prematurely. If the patties are sticking to the grill, let them be: They’ll release easily when they’re ready. Strive to flip only once!

When the top of the burger shrinks a bit and starts to look a little gray, it’s time to flip. If you’re adding cheese, do it just after you’ve flipped.

As the burgers cook a bit more, test the center with an instant read thermometer. The USDA recommends cooking ground meat to 160 degrees, but I prefer my burger with a bit of pink and take it off the grill at 125 degrees. The meat will continue to cook after you remove it from the heat.

Drop it on a bun, add your favorite toppings, and open wide! 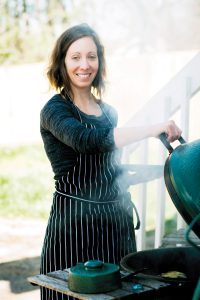 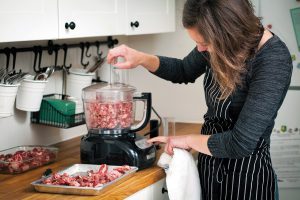 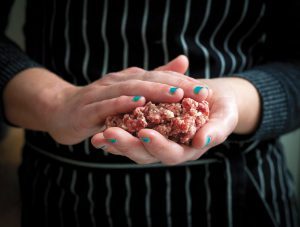 Meredith grinds beef for hamburgers in her West Asheville kitchen. Cutting the meat and fat into chunks and chilling it in the freezer helps preserve the texture during grinding.