By butchering beef at Nightbell, Katie Button saves money, helps farmers, and gets exactly the cuts she wants

Katie Button and Frank Muller are trying to get to the Vegas strip. Not the casino district, but a cut of steak buried deep within a steer’s shoulder.

Boning knives in hand, they’re staring thoughtfully at a hulking piece of beef that began the afternoon even larger, as a 190-pound forequarter delivered to the kitchen of Nightbell Restaurant & Lounge in downtown Asheville.

“About here, do you think?” Button asks, pointing at a spot where the shoulder blade dips down. Muller nods. “Yeah, that’s a tricky one,” he says. “I’m still learning the best way to get that one out.” Carefully, Button goes in with her knife.

Button, the executive chef and an owner at Nightbell and at the nearby—and nationally celebrated—tapas bar Cúrate, and Muller, the director of culinary operations for both restaurants, are working with a crew to break the forequarter down into cuts that will appear at Nightbell throughout the week ahead, including that elusive Vegas strip.

It’s a steak that was “discovered” a few years ago by Oklahoma State University meat researchers looking for new cuts, and you don’t typically see it on a menu unless the restaurant has made the commitment to the kind of “nose-to-tail” (or, in the case of the forequarter, shoulder-to-waist) beef program Button started at Nightbell last December.

In the restaurant world, most chefs work with what are known as “box cuts.” If you serve rib eye, you buy a box of rib eyes from your supplier. But a cow, as Button points out, is not made of rib eyes.

“You have to ask yourself, ‘What’s happening to the rest of that animal?’,” says Button. “You hope that the farmer has somebody else who wants the short ribs, but if not, that meat will end up ground, and farmers don’t get as much for ground beef. If you’re raising meat well, it’s already tough to make a profit. By taking the whole forequarter, we can get a great price on great beef, the meat is put to good use, and we can help to minimize waste, which really matters to us.”

Button buys a forequarter each week during her busy season (and every other week in the winter) from Apple Brandy Beef in the Blue Ridge foothills of Wilkes County, North Carolina. Seth Church, a third-generation cattle farmer, raises Hereford and Angus beef without antibiotics or synthetic hormones, and the cattle graze on pasture until the last few months of their lives, when they’re fed a diet of local grain. (“The fat marbling is really nice” on this grain-finished beef, says Button). After a month or so of dry-aging, which makes the meat more tender and flavorful, it’s delivered to Nightbell, and the breakdown team takes over.

“We have a waiting list of staff members who want to learn how to do this,” says Muller.

Most chefs don’t have experience in butchering at this level; Muller himself had tackled lambs and pigs in the past, but not cattle. When they started the nose-to-tail program late last year, Button and Muller brought in Matt Helms, head butcher at Asheville’s Chop Shop Butchery, to teach them how to break down the forequarter.

At first, they followed the same approach that Helms uses to create the cuts for home cooks sold at the Chop Shop. As time went on, Helms helped them to fine-tune methods for the restaurant’s needs. “We didn’t need chuck roasts, and we did need as many steaks as we could get,” says Button.

Now the Nightbell team follows a multi-day process to get every usable scrap off the forequarter. Every Thursday, three staff members spend a couple of hours breaking down that week’s delivery into high-value cuts like short ribs and steaks. The next day, prep cooks and sous chefs will go back to the carcass and trim off as much meat as possible, most of which will end up ground.

Button says, “We can get an extra three to five pounds just off the vertebrae, and we can use the bones to make stock. The whole breakdown process takes at least ten hours of labor, but we still end up ahead in our food costs.” And Button ends up with a range of beef that inspires creative cooking for her and adventurous eating for customers. Some of the meat goes to Cúrate for its albondigas (Spanish meatballs), but most of it stays at Nightbell.

The menu lists steak without specifying a cut or a price—you learn from your server what’s available that day—but it’s always served with a blue cheese demi-glace that echoes the gentle funk of dry-aging. The burger contains Benton’s bacon as well as beef, and it appears on a house-made grit brioche bun with cheese from Chapel Hill.

The mock tenderloin has to be lovingly massaged out of the chuck section. The lean meat then shows up as steak tartare in crisp and translucent cones of feuille de brick (a Tunisian pastry by way of France), layered with smoked horseradish cream.

You won’t be able to get short ribs on a Friday because it takes days to make them, but this summer you could find them later in the weekend, braised with sherry and white wine and orange (the sauce changes with the season) and served with grilled fennel tossed in the fat skimmed off the sauce. When the short ribs run out, there are sausages. And then comes Thursday and another forequarter.

“Our customers don’t mind that the menu changes—they love it, especially when they understand why we’re doing it,” says Button. “We’ve always been committed to local products and sustainability, but this is a chance to work on other issues that really matters to us: food security and food waste. In Buncombe County, one in four children are food-insecure—their families don’t know where their next meal is coming from—and that’s much higher than the national average.”

With her parents, Elizabeth Liddell Button and Ted Button, and her husband, Felix Meana, who are also co-owners of the restaurants, Button supports MANNA FoodBank and the Downtown Welcome Table, a local organization that serves free family-style meals to the community. “We’ve been focusing our nonprofit work on food security, but we’re also trying to model the reduction of food waste in our kitchens,” she says.

Earlier this year, Button was one of fifteen chefs from across the country who gathered at the James Beard Foundation’s Chefs Boot Camp for Policy and Change to share ideas about how to throw away less food, and it reinforced her commitment to the nose-to-tail program at Nightbell.

When there’s nothing left but bones and fat that were exposed to air in the dry-aging process and therefore can’t be used for stock or other purposes, the remains of the forequarter are picked up by local company Danny’s Dumpster, which incorporates them into its compost production. Not every restaurant in every city would have access to that kind of service, Button points out. The customers, farmers, and other entrepreneurs in the region make the nose-to-tail program possible, and she’s hoping to implement a pork version at Cúrate when the restaurant completes a planned expansion.

“This community both really pushes you and really supports you in doing things better,” Button says.

C.A. Carlson was born and raised in Iowa (ask her about butter sculpture!). She now lives in Asheville, where a third of her refrigerator is devoted to local pickles. 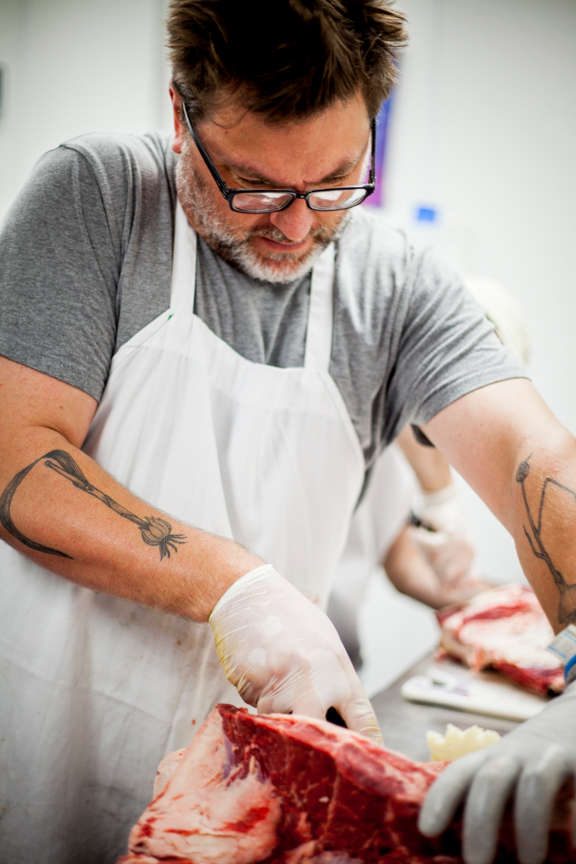 Magic in the Making
Scroll to top