As a kid, Ed Selle spent afternoons after school with his grandmother until his parents got home from work. His grandmother would often be busy in the kitchen of her Brevard home, making cornmeal-fried squash or butter beans and rice alongside servings of chicken or pork—all local and seasonal ingredients that shined on her table.

“I was right there at her elbows in the kitchen,” Selle says.

A passing childhood interest evolved into a successful career for Selle, launched by a formal training at A-B Tech’s award-winning culinary school and steered by opportunities from valuable mentors. Today, as the newly appointed executive chef of Canyon Kitchen—the idyllic fine dining restaurant in Sapphire that was developed by seven-time James Beard Award nominee John Fleer, owner of Asheville’s Rhubarb and Benne on Eagle restaurants—Selle embraces the idea that his primary job is to source high-quality ingredients from reputable producers and then guide the food’s flavors and textures toward their potential.

After graduating high school, Selle planned to study agriculture at NC State University and eventually join the family business. His father owned trout farms on the headwaters of the French Broad River, raising rainbow, brown, and brook trout. But Selle felt out of place at school in Raleigh and returned home to Brevard, only to face a growing pressure from his parents to return to school somewhere.

Leaning on his years-long interest in cooking, fostered in part by a part-time job in the kitchen of nearby Connestee Falls Clubhouse, Selle decided to enroll in A-B Tech’s culinary school. “I already knew a few things from working in the restaurant and so it was a natural fit for me,” Selle says.

It was there at A-B Tech that Selle received a skills-based education that emphasized the many aspects of operating a good restaurant, from controlling costs to building a beer and wine program. Selle gravitated toward instructors that placed a high priority on the customers’ overall experience, preparing him for a long career in the kitchens of private clubs, where the diners are often members, and every effort is made to provide what they’re looking for. “Saying ‘no’ is not really an option in this role,” Selle says.

After his first year at A-B Tech, Selle landed an internship at the Chattooga Club in Cashiers—a stroke of good fortune that introduced him to a valuable mentor, Bryant Withers, a well-respected chef who would later become the executive chef of Highlands Country Club. “That’s when I realized that being a chef was what I wanted to do.”

Graduating from A-B Tech in 2009, Selle spent the next several years at the Chattooga Club, spending the off-season months at Yellowstone Club in Big Sky, Montana, and a quail hunting plantation in the Florida panhandle. After working his way up from line cook to sous chef, Selle was appointed executive chef of the Chattooga Club in 2016, giving him his first opportunity to flex his leadership skills, becoming a manager and mentor to other chefs in the kitchen.

In the spring of 2021, Selle joined Canyon Kitchen, located in the community of Lonesome Valley, just outside of Cashiers. (The restaurant is open to the public). It’s a good fit for Selle, who plans to carry on his grandmother’s tradition of sourcing local and seasonal ingredients, with the menu offering fresh fish from Sunburst Trout Farms, Joyce Farms chicken, Benton’s bacon, and produce from Franklin-based Carringer Farms.

Crediting a handful of chefs who took the time to become mentors to him, Selle also acknowledges the role of A-B Tech in sharpening his skills and creating successful chefs who make their place in a competitive field. “A-B Tech is definitely doing something right,” Selle says. “A lot of the people I went through the program with are still in the industry and doing really well.” ◊◊ 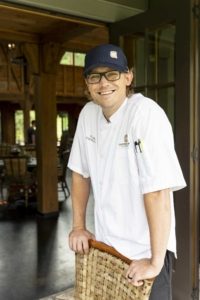