A DEDICATION TO FLAVORS

Kether Smith always loved art and developed an early fondness for ceramics and photography. So after graduating high school, she moved to Asheville to pursue formal studies at UNC Asheville. But in the midst of learning the best way to throw clay and shoot photos, she realized that some of her most creative work happened outside of the classroom, while cooking and preparing meals with a roommate. Eager to foster a budding interest in food, she enrolled in A-B Tech’s award-winning culinary program, while still finishing courses at UNCA, and launched a career that would guide the next two decades of her life and prepare her for her current role as co-founder of the popular cider and wine company, Botanist & Barrel.

“The art I did was always for myself, but the food I made was always for other people and I like that,” Smith says. “There’s the skill of plating and presenting food, and then combining flavors on a plate is a whole other thing.”

While enrolled at A-B Tech, Smith realized that each instructor imparted a different set of skills to their students. Some would teach the nuts and bolts of cooking and baking techniques, while others focused on the practical side of a career in the kitchen, like writing business plans and creating budgets.

“A-B Tech is actually such a core part of what created me,” Smith says.

A key moment in Smith’s experience at A-B Tech occurred when she earned a coveted spot on the prestigious team of students that would represent the school at an annual American Culinary Federation competition. Tasked with presenting a salad in the team’s multi-course submission, she struggled to create an acceptable version of one main ingredient. A fines herbes salad featured julienned tomatoes, fresh mozzarella rolled in purple basil and a citrus vinaigrette. But a smoked salmon sorbet that was supposed to shine delivered disappointing flavors and didn’t complement the rest of the dish.

Encouraged by an instructor to continue working and experimenting, Smith engaged in a long process of trial and error, making adjustments until she created a version that was “actually really beautiful,” she says.

“We learned to work on something until we got it right and this was important—this process,” Smith says. “And that’s how we approach things now at Botanist and Barrel.”

After graduating in 2003, Smith went on to accept a number of different roles in celebrated kitchens—each one helping her cultivate a new skill. As a chef at Cherokee Town & Country Club in Atlanta, she perfected the techniques of high-end cuisine, creating a portfolio of palate-pleasing salads and appetizers. After moving back to Asheville, she became a chef at the former Laurey’s Catering, now known as 67 Biltmore Downtown Eatery + Catering, and learned to pursue her own creative freedom with food. Later, at Biltmore Forest Country Club, she was recruited as a pastry chef and fine-tuned her baking skills.

In between the different roles, Smith and her husband, Deric McGuffey (whom she met at A-B Tech, after bonding over a shared love of art while washing dishes), started a family and welcomed twin boys in 2007. Just a short time later, the young clan moved just outside of Chapel Hill to be closer to family. It was there that they discovered a nearby blueberry farm had gone up for sale and embraced a new life as fruit farmers.

The Cedar Grove Blueberry Farm was prolific and yielded a lot of fruit, but Smith and her husband soon discovered that they couldn’t sell the ugly berries at local farmers markets, and so they needed to find a way to use the bruised, misshapen, and yet still delicious fruit. Hence, the beginning of a wine and cider business, Botanist and Barrel.

“We said, ‘let’s make wine and cider with our ugly fruit!’ And I thought, yes, the principles for flavor balances are the same for food and beverages.” Botanist and Barrel—which Smith and her husband started in 2017 alongside her brother, Lyndon Smith, a former wine distributor, and his wife, Amie Fields—specializes in wines and ciders that are raw, wild, unfined, unfiltered and unpasteurized, using fruit that are organically and sustainably grown on local farms. “We just let the fruit and wild yeast do the work,” she says.

Taking advantage of a quickly growing demand for their beverages, Botanist and Barrel is planning to open a taproom in downtown Asheville and Smith is crossing her fingers that the new location on Broadway Street will be open in the spring. The taproom will offer food from Sawhorse, a popular local restaurant owned by chef Dan Silo, and give guests a way to sample the different wines and ciders from Botanist and Barrel and then head home with a bottle of their own. ◊◊ 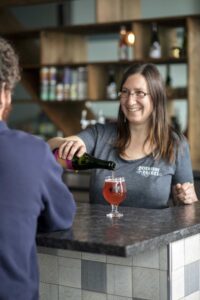 Baskets of Bounty
Scroll to top