It may be “milk’s leap toward immortality,” but cheese has also transformed the lives of the WNC families who make it

English Dairy Farm unfolds from either side of NC Highway 221 in McDowell County, nestled in a bucolic, rock-studded mountain valley, with silos and barns that look like they might have even pushed up from the earth naturally, right along with the granite and grass. But its journey is one of hard work and adaptive change in the face of industry consolidation, stiff regulation, and unpredictable prices. From its humble beginnings in 1926 as a five-cow dairy operated without electricity to its modern incarnation as a 70-cow dairy with a lively cheese operation, English Dairy Farm holds as many stories of evolution as it holds rocks in the mountainside.

Across the Pisgah National Forest from there, directly north of Asheville, another family farm has memorably and diligently stayed the course, moving both local and national conversations in the dairy industry. Spinning Spider Creamery sits on seven acres among the sheltered mountain coves of Madison County. Champion dairy goats, the handmade chèvre from their milk, and the close-knit, practical family that stewards it all make for a successful conversation between land, animals, and people. And its history spans from some of Asheville’s first farmers markets to a high standard for dairy goat production nationwide.

Aside from awe-inspiring dedication, delicious cheese, and triumph over many odds, the commonality these farms share is the deep involvement of family in the business structure, and the role each farm plays in bringing generations together.

“This is essentially a 4-H project that got very, VERY out of hand,” says Cullen Owen, laughing. Cullen is one of three brothers making up the second generation of farmers at Spinning Spider Creamery, and he acts as farm manager when he isn’t out of town judging dairy goats. His mother, Chris Owen, heads the farm full-time, and she admits that the farm operation came about because she was a homesteader looking for healthy milk for her boys. Likewise, the commercial cheesemaking operation arose from her hobby cheeses, sold in ziplock bags at 4-H fundraisers.

Now, Chris Owen volunteers as director of the National Dairy Goat Association in addition to her farm business duties, and Cullen works for the association, as an appraiser and a widely traveled dairy goat judge. While son Cullen and mom Chris make up most of the dairy’s workforce, brothers Morgan and Sylas and dad Jeff also have deep roles in keeping the farm running, making it a full-fledged family affair. 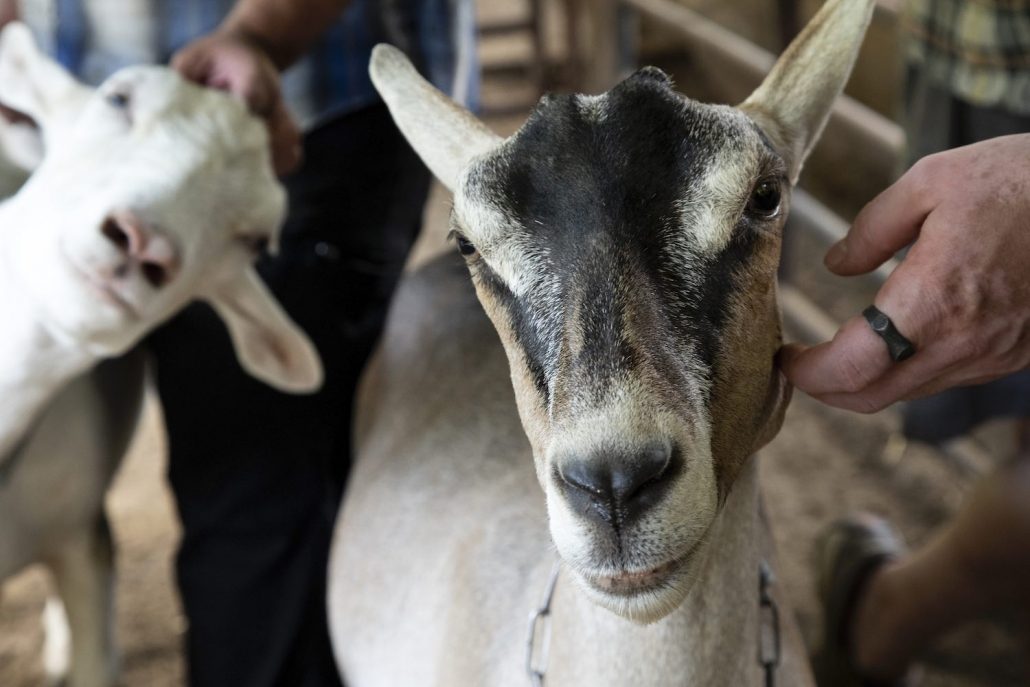 Farming is an undulating and complex profession, marked by monotonous and ancient labor as well as routine metamorphosis. Relationships of all kinds are key. “We have such a huge attachment to our animals,” Chris says, noting the closeness that comes from milking twice each day, and the hard work of attending the birth of every kid, sleeping in barns, and sometimes bottle feeding young goats until they can make it on their own. This closeness to the animals and attention to their well-being has led to Spinning Spider Creamery’s decided leadership in dairy goat performance standards, and to top genetics in their breeding enterprise. In addition to the sale of breeding animals to farmers near and far, milk from the farm’s production goes into award-winning chèvre, bloomy cheeses, and aged cheeses for local markets.

Cheesemaking itself marks a unique relationship with each farm’s product, requiring patient attention to the milk’s quality and character in order to develop signature products. Each batch of cheese follows a brave journey, from daily milking in the barns, to milk pasteurization and processing, and then the careful addition of cultures and conditions that transform fluid milk into the rich and varied textures of small-batch cheeses. For small dairies, cheese products are a way to steward and capture the more nuanced flavor and character of the farm’s milk, and also a way to raise the milk’s value. Boutique flavors in farmstead cheeses differentiate dairy operations from one another, and cheese sells for a higher price than milk, offering a value-added enterprise that can ensure the overall success of the farm.

Cullen sees a parallel between the closeness of the family to the animals and their milk, and the closeness of the family to each other. “Working together has created a very close bond between us,” he says. “It’s really special for sure.” And while Chris and Jeff used their land as a learning tool for their homeschooled sons, Chris emphasizes that she never forced the boys to take an interest in it. Chris believes that the relationships the boys formed through showing goats and selling at the farmers market has been integral to their interest in the family business. “We’ve never been just quietly stuck on the farm,” Chris says. “Feedback from the customers and exposure to the connected, wider world have been huge.”

At English Dairy Farm, a similar story emerges, though the cheese comes from cows’ milk instead of goats’. Susan English and her husband, Terry, comprise the fourth generation of the farm; it was started by Terry’s great-grandfather, who set jugs of milk on ice and left them for sale by the side of NC 221 in the earliest years of the farm’s production. With the addition of electricity in the 1950s, barns were built and the herd increased, allowing English Dairy Farm to enter the commercial milk market and usher in a new level of production under Terry’s father, John. Now, the operation continues to supply milk to the local market, but it also supports a farmstead cheese business, which developed out of Susan’s hobby cheeses. English Farmstead Cheese now sells cheese curds, fresh cheese spreads, and hard cheese like cheddar and gouda. 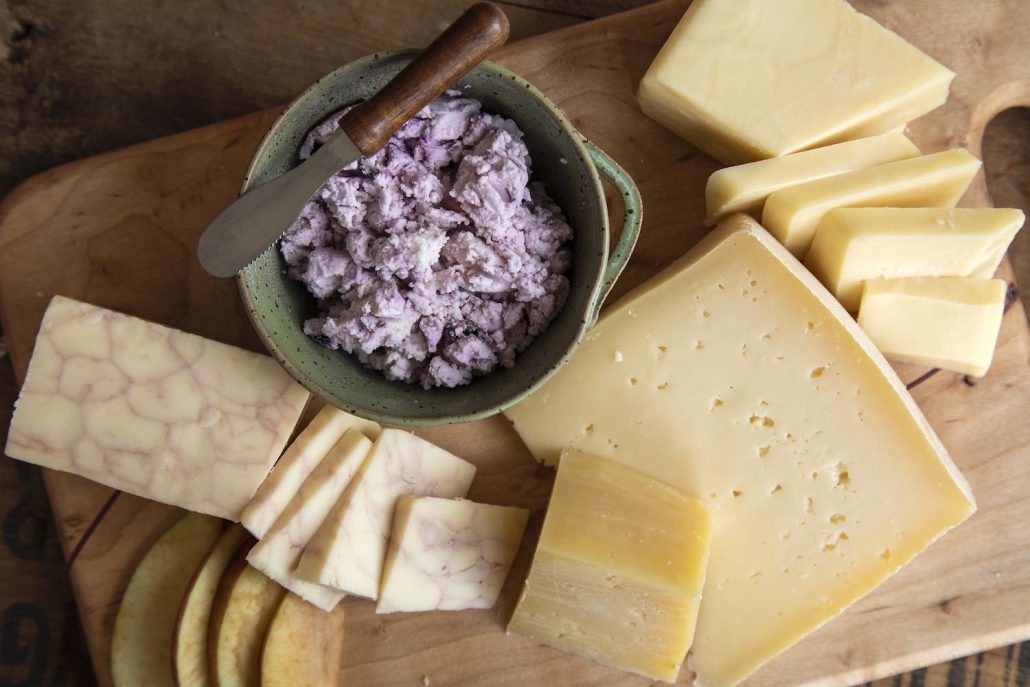 “At first, the cheese business came about because our three girls went off to college,” Susan English says. “We did it, and nobody’s life depended on it. But then the bottom dropped out on milk prices. Our cheese business kept the farm going.”

The eldest English daughter, Elizabeth, corroborates the struggle of the small dairy farm. One of three girls born to Susan and Terry, Elizabeth turned her active role in high school 4-H into a scholarship in animal science at NC State University, and a job with The Dairy Alliance, a program of the National Dairy Council. She works as senior manager of farmer relations, and she sees the ongoing challenges smaller dairies face across the nation. Her work has enabled her to understand how unique her family’s story is, and how inventive small farmers have to be to stay in the game. “There’s no evil in small or in large dairy,” Elizabeth says. “But smaller farmers are going to have to continue to be creative. I think smaller farmers are always going to find a way.”

Though she cites her experience growing up on the farm as integral to her path into the dairy industry, she doesn’t remember being forced to work on the family farm. “It’s funny, but we weren’t ever required to work when we were kids, and I’ve often won- dered why,“ Elizabeth says. Her account echoes that of Cullen Owen: two people growing up on dairies as an introduction to a vast industry, never forced to feel passionate about it, and both working today in dairy on a national scale. Sisters Rachel and Ashley also work for the farm. Rachel has turned her advertising degree into a job marketing the family’s cheeses, and Ashley assists her mother in the cheese production room when she’s not busy with her job as a school principal.

“Everyone in the family lives and works on this land, and stays close because of it,” Elizabeth says. “Growing up, I could walk 50 feet and go see my dad, grandpa, or uncle.” And while she wasn’t expected to work, the deep responsibility modeled by her elders has shaped her view of life. “Growing up on a farm shows you a lot of work ethic in action,” she says. “You can’t be selfish. You have a job to do every day, and if you don’t do it, something will suffer.” 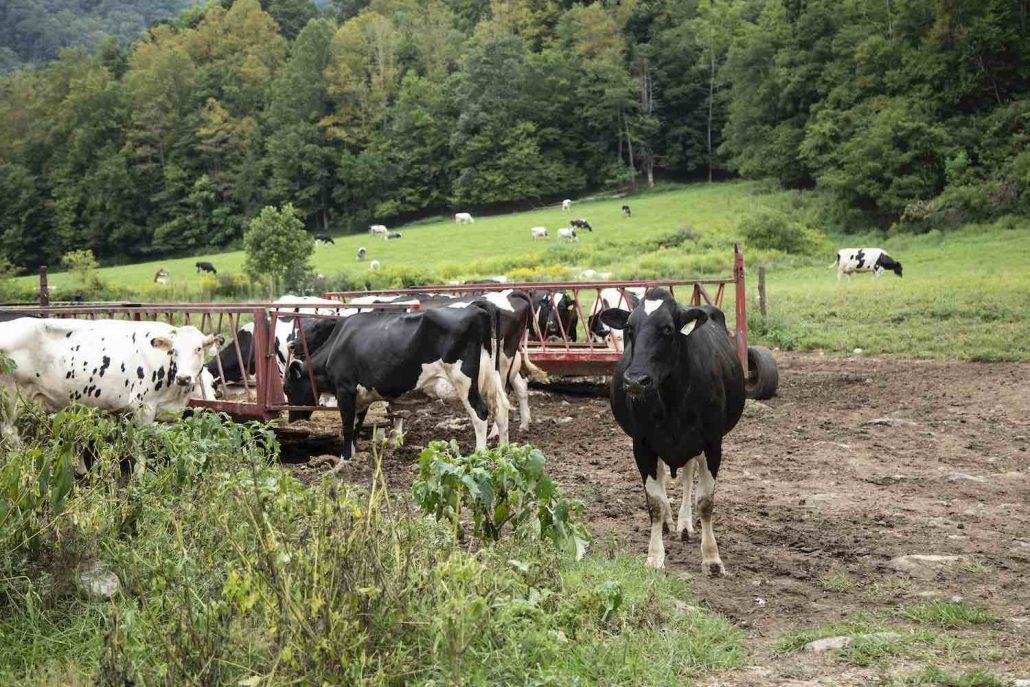 Cullen Owen feels that same commitment to the people and creatures around him. “I love the animals,” he says. “My mom definitely modeled a lot of care for them, of course, but I don’t think you can be around them all the time and not develop that re- sponsibility and attachment.” Cullen has thought of taking the farm over full-time when his parents retire. While he has felt rebellious or tired at the drudgery of early-morning milking more than a few times, he says, “I don’t think I could give up the animals. I have such passion for them, and I just don’t know where else I could get that.”

Mom Chris tries not to put pressure on the future. “We’re definitely thinking of what is manageable, and whether we can depend on the kids to keep it going,” she said. “But if it’s not for the kids, we’re thinking of other options, too.”

At English Dairy Farm, thoughts of the future are just as relevant. Elizabeth says she does feel an obligation to the farm, “not necessarily to go and run it, but to be involved in strategizing about how to keep it going.” For their part, Susan and Terry are planning ahead, but carefully. “We are thinking and meeting with people, and we can’t say for sure that the kids will want it, “ Susan says.

And if they don’t? Susan says, “The day that that would have to be decided would be a tough day. I’m sitting here looking out the creamery window, watching my nephew, Jay, carry a bucket. He’s off to feed something that needs feeding…” and then she trails off, no doubt trying to imagine a day when nothing needed feeding or tending. Someone has been milking cows at English Dairy Farm every single day for almost 100 years.

But then she speaks again. “Transformation is a way of life for farmers,” she says. “I guess anything is possible.” ◊◊

Meredith Leigh is the author of The Ethical Meat Handbook: A Complete Guide to Home Butchery, Charcuterie, and Cooking for the Conscious Omnivore (3rd place, MFK Fisher Award 2015) and Pure Charcuterie: The Craft & Poetry of Curing Meats at Home. Meredith works part-time for Living Web Farms, and she travels extensively teaching charcuterie and food production and processing. She also pursues other writing, namely poetry and nonfiction focused on the intersection of land and people, and land and the culinary sphere, with work featured in Crop Stories, various Edible publications, and Mother Earth News Magazine, among others. She lives with her partner and four children in Asheville, NC. 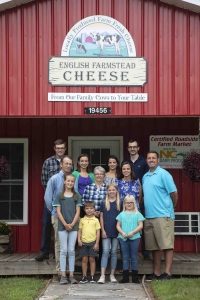 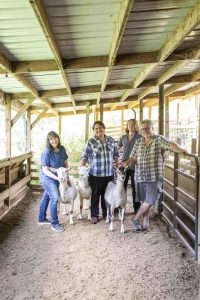 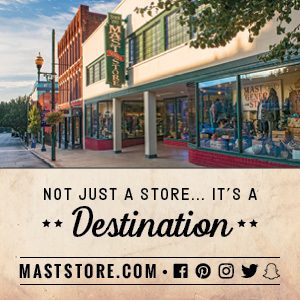