On any given night, The Lobster Trap is humming. The popular restaurant in downtown Asheville consistently ranks among the best places to get fresh seafood and pulls a diverse crowd: families toasting a graduation over a two-tiered tower of King Crab legs, Little Neck clams, and Gulf Coast oysters, groups of tourists splurging on the Surf and Turf combo of prime New York strip and crab legs, and date-night couples enjoying the restaurant’s namesake, fresh Maine lobster, with nothing more than drawn butter and a lemon wedge.

Behind a bubbling tank of live lobsters, a small team of chefs shuck oysters and scoop chunks of delicate lobster meat onto fresh-baked brioche buns to satisfy the near-ceaseless demand for The Lobster Trap’s popular lobster roll.

Meanwhile, in a tiny hallway office away from the whir of activity, chef and owner Mike McCarty phones purveyors up and down the Atlantic Coast and around the Gulf, reviewing recent catches for his weekly seafood orders. He takes notes on where items were sourced and how they were caught, even how they’re managed before and during an over – night flight to the mountains of North Carolina.

In addition to having a solid reputation for its flawless approach to seafood classics, The Lobster Trap is a leader in the sustainable seafood movement, sourcing more than 85% of its menu from harvesters, growers, trappers, and fishmongers who take measures to protect dwindling populations of fish and shellfish and avoid methods that damage the environment and other marine life.

These efforts have brought The Lobster Trap a coveted “leader” award from the James Beard “Smart Catch” program, making it one of only three restaurants in Western North Carolina to earn that distinction in 2020. The other two are Cúrate and The Marketplace, both in Asheville. William Dissen, chef and owner of The Marketplace, is a vocal advocate for sustainable seafood and has been honored for his work by Seafood Watch, the influential seafood protection program run by California’s Monterey Bay Aquarium.

The Smart Catch program, overseen by the James Beard Foundation, asks restaurants to offer no more than two menu items that have been flagged for either being overfished or caught or farmed in ways that could harm the environment. It requires restaurants with a “leader” designation to document their compliance on a regular basis.

“We have one planet and one set of oceans,” McCarty says. “We have to take care of them.”

The menu at The Lobster Trap is a reflection of what can be sourced and harvested responsibly. Diners will rarely, if ever, find fish that appear on well-known “watch lists,” such as imported bluefin or yellowfin tuna, imported swordfish or wild-caught Atlantic halibut. What diners will find is a diverse menu of seafood favorites, sourced responsibly and with intention.

Ever since its launch in 2005, The Lobster Trap has imported its namesake fresh lobsters from Maine, where the crustaceans thrive in the cold Atlantic waters and have been commercially harvested since the mid-1800s. Eager to protect an economically valuable industry, the state regulates lobster fishing with limits on licenses, restrictions on harvest times and volumes, and fines for the mishandling of female lobsters carrying eggs.

Risking a $200 fine, lobster harvesters put a notch in the tail of breeding females, designating her as off-limits for the remainder of her life. Other crowd-pleasers at The Lobster Trap are often sourced from closer locales, but still sustainably. Oysters often hail from the North Carolina coast, the self-described “Napa Valley of Oysters,” where the bivalves deliver a particularly salty taste that oyster fans love. They’re served raw, baked, grilled, or baked as Oysters Rockefeller with fresh watercress, garlic, parsley and Pernod topped with Hollandaise sauce and breadcrumbs.

By now, the challenges of overfishing are well documented, as are the environmental problems associated with certain fishing and farming methods. At a time when the world is consuming far more fish—increasing more than 120% between 1990 and 2018, according to the United Nations—the percentage of fish stocks that can maintain their own biologically sustainable levels has dropped from 90% to 65%.

The problem has gotten so bad that the nonprofit Environmental Defense Fund has called overfishing the “most serious threat to our oceans.” After becoming executive chef of The Lobster Trap in 2013, McCarty immediately imposed new standards for sustainable sourcing. The corresponding increase in prices took some diners off guard, but others applauded the move toward responsible sourcing.

“Once they realized what we were doing, it was okay,” says McCarty, who appreciates a diner who seeks both good flavors and textures, as well as ecological values. “We have a seafood restaurant,” McCarty says, “and we need to take care of what’s providing for us.” ◊◊ 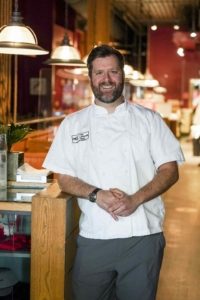 Mike McCarty, owner and chef at The Lobster Trap